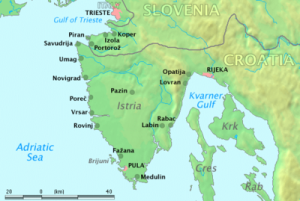 Yesterday I visited Koper, Slovenia with my son, Kevin.  We had neither one ever been to Trieste, which was the motive for coming, and from Trieste we made a day trip to Slovenia.  Koper is on the Adriatic, it’s very pretty and close to Trieste, being only 45 minutes by bus.

So we enjoyed a pleasant day in Koper, and while waiting for the bus back to Trieste, I found myself alone in the waiting area with a woman.  After a moment she got up to go throw out some trash.  She limped to the trash container and back to her seat.  I was about to ask if I could pray for her leg when I suddenly thought: She probably doesn’t speak either Italian or English.  So I didn’t.  And I’ve been wrestling with myself ever since.

Finally this morning, when I just couldn’t take it anymore, I asked the Lord about it.

Me:  Why did you put that lady there, knowing that I would be too intimidated to pray for her?  You know the end from the beginning, so why?  Was it to test me?

God:  No, it was to show you what is stopping you.

As soon as I asked that, I remembered an encounter with a demonized boy who started manifesting at the sight of me.

God:  The demons know who you are, so they did everything they could to intimidate you.  They reminded you of rejection and abandonment, and it worked.  Next time, remember this, and be bold.

I will!  And to my readers: perhaps there have been times when you’ve been intimidated into silence.  But remember this: the only way that the enemy can possibly win a battle is if we back down.  The enemy is defeated, and the end of the book has already been written.  So winning these temporary little battles is all he can hope for.  Let’s don’t give him even the smallest victory.  Let’s be bold!  God is good!