Life has substance in Heaven!

In March I wrote about tongues being an extra-dimensional language, which was a revelation from God (see Vision and Extra-dimensional Prayer).  Today I got a glimpse of Heaven, and God showed me that in Heaven everything has extra-dimensionality, even those things that seem insubstantial to us: words, colors, thoughts, life, and spirit.  Of course, those things are for the most part indescribable.  There is no practical way to describe extra dimensions in a way that three-dimensional beings can understand.  That’s why the Bible has lots of bizarre creatures and visions.  That’s also why people who have been to Heaven try to describe what it’s like, and they can’t adequately do it.  They say vague things about the flowers, grass, and trees being so alive.  That’s because the flowers, grass, and trees in Heaven are alive, and the life in Heaven is extra-dimensional.  In other words, the living things in Heaven have an extra-dimensional substance to them that makes them seem somehow more alive than their earthly counterparts—and indeed they are more alive.

John Paul Jackson had an interesting insight into the physical state of fallen angels (including satan himself).  He said that they continue falling, losing authority, and losing their former beauty as they fall farther and farther out of Heaven and away from God, the Source of all life.  So in other words, while the devil can manifest as an angel of light (which he once was), it is harder and harder for him to do so.  At the same time it is important to remember that the gifts and the calling are irrevocable (Romans 11:29).  He noted that authority has to do with proximity to God.  Think of Joseph in the Egyptian prison (Genesis 40).  He had no authority in Egypt.  But when he got close to Pharaoh, proximity gave his very great authority.  The fallen angels have lost their authority as a result of falling ever-farther away from God, but their gifts and power remain.

So the devil, who was Heaven’s worship leader, has lost his authority, yet he retains his musical power and gifting.  This is why he has such a strong hold on the music industry.  If it seems that some popular musicians have made a deal with the devil—that could literally be true.  In fact, many rock bands have boasted of their satanic ties, while others try to hide it under a cover of good works.  (See the four-part series They Sold Their Souls for Rock and Roll—and it’s not only rock and rollers who have made this unholy alliance, there are also country artists.)  If you think it doesn’t matter what music you listen to, just look at how music influenced the Columbine killers.  In some of their posts they quoted violent song lyrics that they later acted out to the letter.  The computer programmers have a saying: “Garbage in, garbage out.”  If you feed your mind (and spirit) garbage music, what kind of harvest do you think you’ll reap?  At best you’ll produce no fruit at all, but is that a good thing? (Matthew 21:18-19 & John 15:1-8).

This thought led me to a deeper understanding of the importance of worship.  In fact, I believe that the more free and extravagant that we are in worship, the more effective we are in tearing down strongholds and advancing the Kingdom.  It may just look like singing and dancing, but it is a powerful form of warfare.  And the more our spirit, mind, and body cooperate in worship, the greater the victory against the enemy.  Think of each worship song as a tank, a battleship, a fighter jet; and think of each dance as a grenade, a missile, a nuclear bomb.  We have weapons of mass destruction to destroy every work of the enemy, and we don’t even realize it.  Think of Joshua at Jericho (Joshua chapter 6).  Think of Jehoshaphat’s worshipers that led the army of Judah into battle (2 Chronicles 20).

But what do we do?  We stand when the worship begins in church on Sunday morning, but we don’t sing out-loud for fear of sounding off-key.  We may clap when prompted by the worship leader, but not with any real enthusiasm, and quitting as soon as we can.  Some of us raise our hands, but our bodies remain still as statues.  The few who do dance or worship with flags are often criticized by those who think they are doing it to get attention.

Any time that you step out in faith and do something out of your comfort zone because of the Holy Spirit’s prompting (whether in worship or ministry), there will always be someone who doesn’t have the same vision or revelation that God has given you.  You will be criticized.  And although the devil has seeded his own in the churches, it doesn’t mean that the critic is one of the devil’s flock.  Often sincere believers will criticize someone’s vision, believing that they are helping you find your way back to the truth.  This is when it’s very important to ignore criticism (with all the kindness and compassion in you) and cling to God and to the vision He has given you.  Of course, every vision and every revelation must be measured up to the Word of God.  If your vision contradicts the Bible, then you need to repent and get back on course.  Sometimes the critic are right.

So be courageous, be bold, be full of faith, and go destroy the works of the enemy.  God is good!

This morning as I sat silently before God, He reminded me of one of the Bible’s only other Raptures: Elijah.  However, the focus wasn’t on Elijah, but Elisha.  Elisha is a person I can relate to.  Elisha asked for a double portion of Elijah’s anointing.  Imagine that!  Elijah’s anointing wasn’t enough for him:

The anointing that shut off the rain for three years, and then brought them back at his prayer.

The anointing that took Elijah to the Brook of Cherith and provided for him there.

The anointing that provided unending flour and oil for the widow of Zarepath, and raised her son from the dead.

The anointing that allowed Elijah to walk into King Ahab’s court unseen by the guards.

The anointing that caused fire to fall from Heaven and burn up a soaking wet offering and the water, too.

The anointing that allowed Elijah to outrun Ahab’s chariot.

The anointing that predicted the deaths of Ahab and Jezebel—and caused Ahab to repent for Naboth’s vineyard.

The anointing that parted the Jordan.

The anointing that predicted Elijah’s Rapture in the whirlwind.

What kind of almighty audacity does it take to want a double portion of that kind of anointing?

Well, Elisha had the audacity, and so do I.  I don’t want the anointing for some kind of lame self-glorification.  I want it for the same reason that Elisha did: because the anointing is more of God, Himself.  God says, “I am your very Great Reward,” (Genesis 15:1).  The presence of God is very addictive.  Once you’ve experienced it, you just want more and more of Him.

These are the days when God will open up this kind of anointing on those who really want it.  We will perform signs, wonders, and miracles, as a testimony to the world of who God is (2 Corinthians 12:12).  We will expose others to God’s addictive presence, and get them hooked on it as well.

Elisha asked for a double portion of Elijah’s anointing—and he got it.  How did he get it?  By watching.  In fact, Jesus said, “Be always on the watch, and pray that you may be able to escape all that is about to happen, and that you may be able to stand before the Son of Man,” (Luke 21:36, emphasis mine).  So keep watching and praying!  God is good! 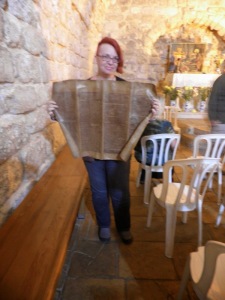 This is me in Nazareth, holding a 500 year old parchment (I think it’s Isaiah)

Above all, you must understand that in the last days scoffers will come, scoffing and following their own evil desires. They will say, “Where is this ‘coming’ He promised? Ever since our ancestors died, everything goes on as it has since the beginning of creation.” But they deliberately forget that long ago by God’s Word the heavens came into being and the earth was formed out of water and by water,” (2 Peter 3:3-5, emphasis mine).

There are some sincere Christians who don’t believe in the Rapture.  Or perhaps they believe in the Rapture, but not pre-Tribulation.  I believe that these people are genuinely born again, but they are deceived—as deceived as they say that pre-tribbers are.  So what’s the deal?  How can we explain this phenomenon?

Jesus said that the End Times would be a time of deception—deception so big that it could fool even the elect (Matthew 24:24), and perhaps will for a time.  This is the biggest danger, the danger that will open the door to all the other dangers of the Tribulation period: deception.  In fact, Jesus warned four times in Matthew chapter 24 about deception, and repeatedly told His disciples to watch out for false prophets, false christs, and deceivers.

Why do these Christian believers deny the Rapture?  Here are some of their arguments against the Rapture:

In addition, there are two individuals in the Bible who were raptured (suddenly taken into Heaven): Enoch (Genesis 5:24) and Elijah (2 Kings 2:11).  So by their example, we have an example in miniature of what a worldwide Rapture will be like—a sudden seizing or snatching away.

So there is an escape clause.  Otherwise, why would Paul write, “God did not appoint us to suffer wrath but to receive salvation through our Lord Jesus Christ,” (1 Thessalonians 5:9)?  But you’ve got to be watching for the Rapture.

I hope this helps clear up any confusion.  But as always, the best way is to get right with God now.  Not only will you escape the coming wrath, but it will make your remaining days on earth better in ways you can’t even imagine.  God is good!