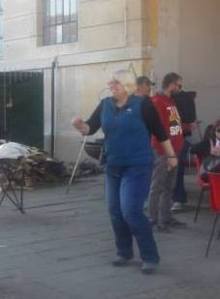 There was music and dancing at the BBQ.

I was invited to a grigliata in Biella.  A grigliata is a barbecue.  This was for Pasquetta, which is Easter Monday.  I had just met Caroline, a missionary who I immediately thought could turn out to be a valuable collaborator.  Caroline is a sweet little Italian-American with a big smile and a bigger heart.

The day after Caroline arrived, I had a young missionary coming to visit from Prague.  It was exhilarating to watch Caroline in action with Debbie: now cheering her, now helping her, now questioning her false assumptions—and all done in love.  Debbie was here overnight, and after we saw her off, we made our plans to go to Biella.

When we got there, the BBQ was in full swing.  There was lots of food, music, dancing, and games, in other words: fun.  Even though I had already visited Biella a few weeks ago, the greeting I got was as warm as if I had been gone a year.

There was a young woman at the BBQ who I knew slightly: Bo.  She greeted me, then sat with Caroline, sharing her story for the next half hour or so.  I already knew a little of Bo’s story, but learned more from hearing her pour out her heart to Caroline:

I’m a gypsy from Albania.  Well, OK, my mother was a gypsy and my father was a Serb.  My father left before I was born and my mother died when I was five years old.  A nice neighbor took me in and raised me as her own.  At fifteen I was sold in a marriage contract to another gypsy.  He raped me, and I became pregnant with my daughter.  He was very cruel and controlling.  I can’t tell you all the ways that he abused me sexually.  So I ran away from him and came to Italy.

Bo told Caroline all this with no trace of emotion in her voice or on her face.  This much of the story, I had already heard.  Then Caroline asked for more details about her daughter and step-mother.  It turns out that they were in hiding in a town just across the border in France.  And the ex-husband?  He was looking for her in a larger town in France, where she had put her daughter in school back at the beginning of the school year.  Somehow, he had tracked her down there.  “He is waiting there for my daughter to go back to school after the holiday, but he doesn’t have the right to take her from the school.”

Many years ago, when I worked at a daycare center, I had seen a father under a restraining order snatch his child right from the yard, just by calling him to come to the fence and talk.  So I knew that the school’s rules didn’t mean that the daughter was safely out of reach.

But how had he tracked them down here—and why had he gone to the expense and trouble of following them?  The answer to the second question is a repeat of history: Bo had been sold in marriage, and the daughter, though still too young to marry, could still be promised in a marriage contract to be sold when she turns fifteen.  A more sinister possibility is that the daughter might be sold even now to traffickers for a life of prostitution.  Either way, losing the girl was a financial loss for the father.  Bo said that a virgin girl could be sold for as high as €10,000 for one night.  But whether traffickers or marriage, Bo wanted a better life for her daughter.

It turns out that the father had tracked Bo down simply by watching her posts on Facebook.  Her posts and pictures on social media, intended to keep family and friends informed of her whereabouts, had also kept her husband informed.  Now he was threatening to take the girl, with the help of the French police.  If she doesn’t show up at school, then she will be truant.  Being a gypsy, the girl already has a lot going against her.  Truancy could jeopardize her asylum in France and cause the girl to fall even farther behind in school.

Caroline sensed that she was holding something back because she could just as easily bring the girl into Italy, apply for asylum here, and put her into an Italian school.  Bo said that God had told her to go back to Albania and get the gypsy divorce there.  But when questioned, she broke down and admitted that it was her step-mother that was pressuring her to go back to Albania.  The step-mother was convinced that this would solve the problem and get the husband off her back.  And Bo admitted that she was considering it.  But if she did that, she would have to take her daughter back to Albania with her, and there was a possibility that the gypsy council could decide that the daughter belongs to her father.

“Why would you even consider going back?” I wanted to scream the question.  Bo shrugged, having no answer.

I realized later that probably, having been the one who had sold Bo to this man in a marriage contract, the step-mother was pushing the gypsy divorce to save face in the gypsy community back home.

Caroline, seeing that there was a lot of cultural issues and some underlying issues that Bo was still hiding, made the wise suggestion that we all just stop and pray.  So we prayed and put the whole thing into God’s hands.  As we prayed for her, Bo’s shoulders shook as weeping erupted from within her.  Then we left her.

I don’t know what Bo will do or what will happen with her.  But we have done all that we can to help her make a good decision that will keep her daughter and herself protected.  I know that if Bo will depend on God for help in making those tough decisions, He will protect her and her daughter.  However, these are Bo’s decisions to make.  In the end, we each have to decide whether to trust God or not.

But I know this much: although God will not save you from the consequences of your bad decisions, He can be trusted to guide you and protect you when you surrender your life completely to Him.  God may take you by some ways you do not want to go, but His way is always better.  God is faithful.  God is trustworthy.  And as I always say: God is good!