Seth and Missy contacted me several months ago to see if they could stay with me in Milan.  They needed to come meet with YWAM Milano—that’s Youth With a Mission—but the base was full because they were hosting several people for the meeting that Seth and Missy were coming for.  I have been working very closely with YWAM Milano for several years now, handling their overflow, and occasionally collaborating with them in ministry.  They are a great group of very committed individuals.  Working with them has been an immense pleasure.

So Seth and Missy came.  Their visit got off to a less than ideal start: Seth accidentally left his backpack on the train.  We went to the train company’s office to report the loss, and they told us to check back in a couple of days.  When we did, they told us that no backpack of that description had been turned in.  It had his tablet, half their travel cash, and his Bible in it.  Seth wanted to kick himself at first, but quickly adopted a philosophical attitude about the loss, observing that: “The only thing of real value was my Bible.”  Anyone who has a favorite highlighted, underlined, and note-scribbled Bible will understand his feelings about the loss of his Bible.  I suggested that we pray for whoever found the backpack, that Seth’s Bible would be put to use in its own mission field of one.

After that rough start, Seth and Missy’s visit was good and problem-free.  I had just bought all-weather folding chairs for my balcony, and Seth and Missy were the first to enjoy them.  Afterwards they went on to other parts of Italy—and a quick anniversary trip to Paris—returning to my house before flying back to the US.  They were visitors that I remembered fondly, and have remained in touch with.  So when I learned that Mom wanted me to go with her on a visit to San Francisco, I contacted them in the hopes of renewing our acquaintance. 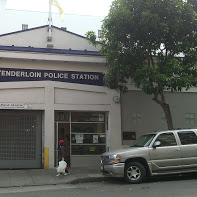 The Tenderloin was always home to the fringe people: alcoholics, druggies, pimps, hookers, and homeless—the whole range of down-and-outers lived among the bars, brothels, flophouses, and massage parlors.  Lately some highly-paid computer tech people from Silicon Valley have bought and restored many houses and apartment buildings in the Tenderloin, pumping money and new life into the neighborhood.  Unfortunately, this has also squeezed out the low-income families that couldn’t afford to live anywhere else in this pricey city.  The gap between rich and poor is wider and more obvious here than almost anywhere else in the US. 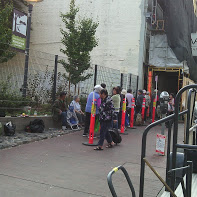 The line for the Food Bank

I found the YWAM San Francisco base directly across the street from a soup kitchen.  That seemed an appropriate place for compassionate Christian missionaries to be located.  In fact, they were handing out groceries to low-income families when I arrived.  Seth and Missy broke away from their Food Bank activities to greet me.  They gave me the grand tour and introduced me to several of the people working there.  They told me that some of the people I saw there were neighborhood volunteers who just wanted to help out, and kept showing up week after week to lend a hand.  Many of them became Christians after being allowed to volunteer in their neighborhood Food Bank. 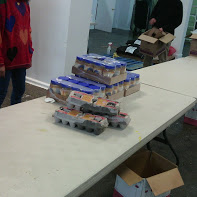 Seth and Missy told me that they are planning a trip to Milan (and other parts of Italy) next summer—something to look forward to!

Apart from the Food Bank there was a lot of activity in other parts of the base, most of it cleaning and clearing.  The occasion, they told me, was because YWAM leadership is coming tomorrow, including Loren Cunningham, the founder of Youth With a Mission.

After the tour, we went for a coffee, and I asked how I can pray for them.  They told me that when this Discipleship Training School is finished (which will be soon), they will be going to Vietnam for three months, leading a ministry team.  They wanted prayer for the trip, specifically for the finances and the responsibility of it.  They still need to raise $22,000.  They know that God has called them, so they know that He will provide, but it’s always a little scary as you wait for that provision to materialize.  So we prayed in the coffee shop, and then they walked me to the BART subway station.

These two youths definitely have a mission, and I believe that wherever they go they will leave this world a better place.  I am feeling very hopeful for the future.  God is good!

Before the building went to YWAM, this was the leading gay meeting place in the whole country.  Now it has been repurposed for godly uses.  God repurposes people, too!