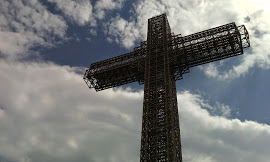 I have spent—no wasted!—most of my life living in fear.  I was afraid to live fully for God.  I knew that there would be a cost for my family, and being a housewife/stay-at-home mom, my family was everything to me.  Then, when my kids were grown and gone, and my marriage had fallen apart irreparably—when I had lost everything, including my very identity—then I did what I should have done many, many years before: I surrendered.

I made that leap of faith—the great cosmic trust-fall—right into the arms of my Savior.  And that’s when I began to truly live.  At the age of 55, newly divorced, and looking for work, the world told me that I had no marketable skills.  In reality, I do have marketable skills, but I believe that my age may have made employers reluctant to hire me.  More than that, I believe that God simply had something else in mind for me, and working as a secretary was not what He wanted for my life.

So at age 55, while the world was telling me that I was done, God gave me a total life makeover and sent me into the mission field.

I knew that I was called as a missionary when I was in high school.  But in my ignorance, I thought of mission work as being in some snake- and bug-infested jungle, suffering from dysentery, while teaching Sunday school.  Like Jonah, I ran the other direction.

A man with two sons told the older boy, “Son, go out and work in the vineyard today.”  The son answered, “No, I won’t go,” but later he changed his mind and went anyway.  Then the father told the other son, “You go,” and he said, “Yes, sir, I will.” But he didn’t go.  Which of the two obeyed his father?

I am like that older son.  I had told God no, but then I did go later—much, much later.

Don’t you realize that in a race everyone runs, but only one person gets the prize?  So run to win!  All athletes are disciplined in their training.  They do it to win a prize that will fade away, but we do it for an eternal prize.  So I run with purpose in every step.  I am not just shadowboxing.  I discipline my body like an athlete, training it to do what it should.  Otherwise, I fear that after preaching to others I myself might be disqualified, (1 Corinthians 9:24-27, emphasis mine).

Keep your goal in mind: Heaven and your Eternal Reward.  Following Jesus is a daily decision.  Jesus said, “If any of you wants to be My follower, you must turn from your selfish ways, take up your cross daily, and follow Me, (Luke 9:23, emphasis mine).

Persecutions are coming.  If you are a true follower of Jesus Christ, then the defeated one has you in his sights.  He has no mercy (not even for his own people), and he will do everything he can to influence the people around you, to turn them against you.  Yes, even your family, even Christians.  This is why you need to make a firm decision now.  Make a firm decision to be radical for Jesus now.  When persecution comes, it will be very hard to stand firm unless you’ve already made the decision.  Like those Christians targeted in the Oregon shootings in October, or like the Columbine shootings, which also targeted Christians: when you’re looking down the barrel of a gun, do you really believe that you will be able to stand firm in that moment?

But the cowardly, the unbelieving, the vile, the murderers, the sexually immoral, those who practice magic arts, the idolaters and all liars—they will be consigned to the fiery lake of burning sulfur. This is the second death, (Revelation 21:8, NIV, emphasis mine).

Take a look at who leads the pack of people that are going to hell: cowards!  Followed by the unbelieving (in other versions, translated as faithless).  I had been one of those faithless cowards, while still calling myself a Christian.  I was too afraid to live my faith openly, and I didn’t believe that God could or would protect me or my family from the consequences of living my faith openly.  Had Judgment Day come while I was living in cowardly unbelief, I would have lead the hell-bound pack.