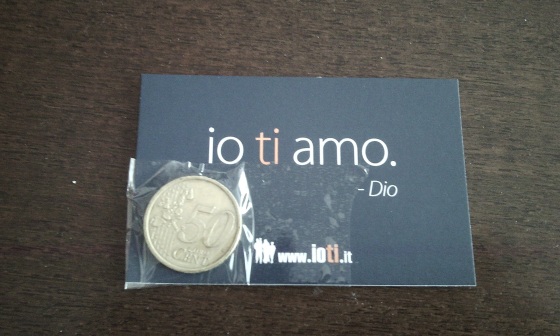 When I moved to Milan, it was my first time ever to live in a big city.  I actually had more culture shock from city living than I did from living in a foreign country.  One of my earliest lessons was never to greet strangers on the street.  The ones that have money will not return your greeting, no matter how friendly.  The ones that don’t have money will take it as an invitation to ask you for money.  In fact, I learned that it’s also not wise even to make eye contact with strangers because some of them will take it as another kind of invitation, and will follow you home.

Beggars are a huge issue here in Milan.  Lots of people don’t give any money to beggars, ever, period.  But Jesus said, “Give to those who ask, and don’t turn away from those who want to borrow,” (Matthew 5:42, emphasis mine).  But there are so many, many beggars here.  Plus there are trafficked people that are forced to beg.  If you give money to a trafficked person it’s not going to help their situation at all.  It’s just going into the pocket of their traffickers.  And if trafficking continues to be profitable, they will continue to traffick and enslave people.

So what’s a compassionate person to do in the face of all this?  One thing that I was inspired to do several years ago was to set aside a “beggar’s purse.”  And whenever I got a 50 cent coin I would put it in that purse to give to beggars whenever they asked.  But as Jesus said, they had to ask for it.  But I still didn’t feel good about giving to beggars because that coin—or even the whole little coin purse for that matter—will never make their life better.

In my house I have a big box of io-ti cards, so called because they all start with the Italian phrase “Io ti . . .” and signed by God.  And the cards say various things: I love you, I am listening to you, I know you, I forgive you, and I am searching for you.  The io-ti cards are a great evangelistic tool, especially for people who don’t speak Italian.  They are great for leaving in a seat on the bus or on the window of a car or in a mailbox, besides simply handing them to people, however the Holy Spirit inspires.  I always pray over a small mixed pile of io-ti cards before leaving the house, that their message will bring salvation to the recipient.

The other day inspiration hit, and I taped a 50 cent coin to an io-ti card, specifically: “Io ti amo,” (I love you).  It occurred to me that “I love you” are words that beggars never hear, and probably the idea that God loves them would be especially important—life changing—for them.

The coin taped to the card is not the only way that I have prepared the cards in advance.  I also pray over the cards.  I ask God to assign an angel to go with each card to speak His words of love to the person that receives it.  I also pray that none of the cards will be discarded once the coin is removed, but that the recipient will read the card again and again.  And of course I pray for the salvation of each recipient.

Now whenever I leave the house, I take both the coin purse and several coins taped to the I love you card (as well as my usual mixed pile of cards).  The difference is that now I don’t wait for the beggars to ask.  Whenever I see a beggar, I pull out a card and give it to them before they can even ask.  Most beggars here have a McDonald’s small drink cup that they use for collecting money in.  The card fits perfectly into the cup—like it’s made for it.

The response has been great.  I’ve gotten a lot of smiles and thanks.  But, of course, that’s not why I do it.  More than anything else, I want to see the beggars saved, along with everyone else in my city.  That’s something that the traffickers can’t take away from them.  Who knows?  Maybe a few of them will get saved, too.  God is good!

2 thoughts on “Giving Wisely and Compassionately”