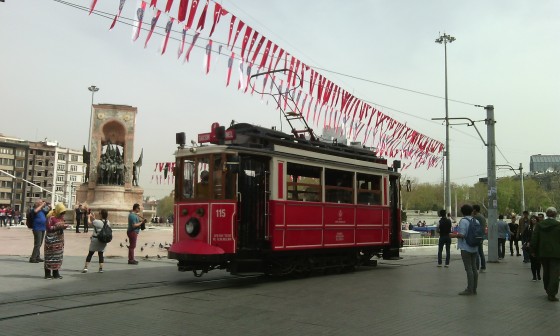 As the conference progressed, I have had time to get to know each of the attendees.  And, we were served dolmas today (stuffed vegetables, see Turkey in the Straw).

One of the attendees I’ve met lives in Istanbul: Gerda.  In fact, she has lived in Istanbul for the last twenty years.  I found myself sitting next to Gerda at lunch one day, so I asked her about the two things I really wanted to see in Istanbul: Hagia Sofia and the Grand Bazaar.  She said that they are definitely worth seeing.  But she added that close to the Hagia Sofia there is also the Topkapi Palace and the Archeological Museum, which has examples of paleo Hebrew in stone as well as some very old Bibles.  She also said that in addition to the Grand Bazaar, there is also the Spice Bazaar, which to me sounds much more inviting.  And all these things are within walking distance of one another.

After the conference we returned to Istanbul, and me to my fancy airport hotel (see The Turkey has Landed).  But as much as I had been looking forward to my sightseeing day in Istanbul, I woke up with a migraine attack.  Now, I’ve been healed of migraines.  I have no doubt about that.  Nevertheless, the defeated enemy sometimes attacks me, and often these attacks happen around the time of a mission trip like this one.  Usually I am able to pray the migraine away, but this one was bad, really bad.  I woke up headachy, nauseated, and weak.  I could barely make myself get dressed and go to breakfast, but I did so, believing that a little nourishment would help.  It didn’t.  I went back to my room after breakfast and seriously considered skipping my sightseeing day.  Eventually I found the strength to get out of the hotel and go into town.

I took an airport bus to the city center.  From there I took the Historic Tram (that’s what they really call it) to the tunnel, called Tünel, the second oldest subway in the world, linking the popular Galata district to Taksim.  From Galata I took another tram over the Galata Bridge to the European side of Istanbul.  There the tram passed the Spice Bazaar.  I got off at the Sultanahmet stop, which stops right in front of the Blue Mosque.  But I was looking for Hagia Sofia. 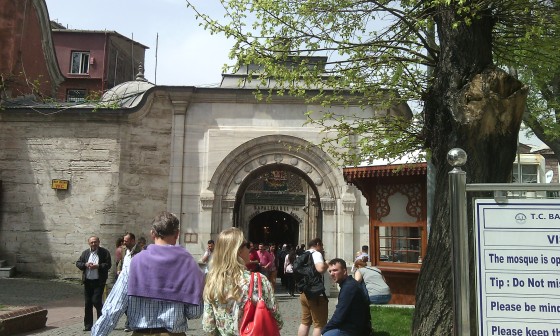 Since I had little energy, I figured that I would go and see Hagia Sofia first and then if I saw anything else it would be a bonus.  But I had walked in the wrong direction.  Sometimes a wrong turn can be a really good thing.  I somehow wound up at the Grand Bazaar.  I walked in, but found the shopkeepers so aggressive and my own energy so low that I quickly walked out again.  I had no strength for shopping at all.  I found a shady spot to sit and consulted the map.  I saw where I had gone wrong and retraced my steps.  I don’t know how I had missed it from the tram except that I was just feeling so wretched that I just did miss it.

I bought a ticket and went inside.  It truly is an engineering wonder to imagine that this dome with its buttressing half-domes was constructed in the sixth century.  But the really surprising thing is that there are cats all over the grounds and even inside.  The cats must be so used to seeing hordes of tourists day after day that they simply saunter around, staying just out of reach, skillfully ignoring the humans as if they were just an annoyance, which I guess they (we) are.  I knew that if there was a lot of enemy resistance, it had to be because our defeated enemy didn’t want me to enter the Hagia Sofia and do what I would normally do: pray.  So I gathered all the strength I had and prayed as the loud speakers from the minarets began to wail the blast-volume call to prayer.  Although I had little strength, prayer thankfully doesn’t depend upon my strength, but upon my God, who is bigger, stronger, and all-powerful.  I let the Lord of Hosts do all the fighting.

By this time my energy was spent, so I got on the next tram and returned to Taksim and the airport bus stop.  When I got to the hotel (about seven PM) I was worn out.  I hadn’t eaten since the breakfast that I had forced down, but I found myself not hungry at all.  I laid down to rest and slept for ten hours straight.

When I woke up early the next morning, I still wasn’t hungry, but I was feeling decidedly better.  The headache and nausea were gone, though I still felt very weak.  Breakfast did help renew my strength.  So I packed and caught my flight back to Milan.  This last day, my day of sightseeing, was more exhausting than a whole week of babysitting and walking little Joey around and around in his stroller.  But I knew that it was important, too.  God is good!