Take a good look at that map.  Europe is the smallest continent on earth, yet it contains about 50 countries[1].  Compare that with 54 countries in the much larger continent, Africa, yet Europe is more diverse.  Europe has the largest country in the world: Russia, and the smallest: Vatican City.  The quality of life is very high in Sweden, and so low in parts of Eastern Europe that in some countries like Moldova, families choose to abandon their children to orphanages, lacking money for contraceptives, an abortion, or to raise them.

Every year when I speak in American churches, invariably someone will say to me: “Yes, but we have those same problems here.”  So this year, I decided to be prepared for this statement by looking at the difference between the US and her European cousins.  What I found shocked me.  Here are the facts:

The following are headlines from www.muslimstatistics.wordpress.com:

Sweden: Migrants are responsible for 95% of all crimes, overrepresented by +430%

England and Wales: Over 56% of Syrian refugees committed severe crimes in less than a year

Muslims in Europe: 443 victims were killed in 18 deadly terror attacks in the last two years

Italy: 90% of teens would convert to Islam if Islamic State conquered their country

Denmark: Muslim men most likely to be criminals

Germany: Public is kept in the dark about Muslim migrant crime wave – Association of Criminal Police

Islamic Sweden is now the world’s second largest rape nation with a 1,472% increase in rapes

UK: Islamic child-sex grooming up by 32% in a year and spread to every town and city

Despite these sad statistics and the seriousness of the Islamic invasion of Europe, God is moving here in Europe.  There are many reports of Muslims coming to faith in droves all across Europe.

The Kingdom of Heaven is like the landowner who went out early one morning to hire workers for his vineyard.  He agreed to pay the normal daily wage and sent them out to work.

At nine o’clock in the morning he was passing through the marketplace and saw some people standing around doing nothing.  So he hired them, telling them he would pay them whatever was right at the end of the day.  So they went to work in the vineyard.  At noon and again at three o’clock he did the same thing.

At five o’clock that afternoon he was in town again and saw some more people standing around.  He asked them, “Why haven’t you been working today?”

They replied, “Because no one hired us.”

The landowner told them, “Then go out and join the others in my vineyard.”

That evening he told the foreman to call the workers in and pay them, beginning with the last workers first.  When those hired at five o’clock were paid, each received a full day’s wage.  When those hired first came to get their pay, they assumed they would receive more.  But they, too, were paid a day’s wage.  When they received their pay, they protested to the owner, “Those people worked only one hour, and yet you’ve paid them just as much as you paid us who worked all day in the scorching heat.”

He answered one of them, “Friend, I haven’t been unfair!  Didn’t you agree to work all day for the usual wage?  Take your money and go.  I wanted to pay this last worker the same as you.  Is it against the law for me to do what I want with my money?  Should you be jealous because I am kind to others?”

Is God speaking to your heart about Europe?  Come join in on the Greatest Harvest The World has ever Seen.  The harvest here is so ripe, and if I may mix my metaphors: God has chummed the waters, and the fish are leaping into the boat.  What have you got to lose?  God is good!

[1] The precise number of countries in Europe is debatable, depending on where you place the eastern boundaries of Europe.  Some say that Russia isn’t in Europe, though parts of it definitely are in Europe.  Turkey, with one foot in Europe, desperately wants to be considered Europe.  In fact, when you cross the bridge into western Istanbul, there is a sign proudly proclaiming: “Welcome to Europe.”  And if you include Turkey, then you might also include Georgia, Armenia, and Azerbaijan.

[2] These statistics pre-date the Refugee Crisis in Europe, that has dramatically swelled the number of unemployed.

The Word of God is alive and powerful.  It is sharper than the sharpest two-edged sword, cutting between soul and spirit, between joint and marrow.  It exposes our innermost thoughts and desires, (Hebrews 4:12).

The Bible is the bestselling book of all time, with estimated total sales of over 5 billion copies.  About 50 Bibles are sold every minute.  The Bible is also the most shoplifted book in the world.  Nine out of every ten people own a Bible.  The Bible has been translated into over 2500 languages.

The Bible was written in 3 different languages on 3 different continents over a 1600 year period by at least 40 writers from diverse walks of life: shepherds, soldiers, governors, kings, fishermen and priests.  The subject matter of the Bible covers all aspects of life on earth: love, marriage, and family life; child-rearing and growing up; teaching and learning; work and rest; governing and dealing with authority; animal husbandry and viniculture; music and dance; food preservation and preparation; medicine; war; and so much more.  Despite all this, there are no contradictions in the Bible[1].  This is amazing when one considers that the Bible was written over such a long period of time by such diverse people and covering all aspects of life on earth.

Think of it: if you found ten people from the same town who grew up together and asked them to write about just a few subjects, what would be the result?  Certainly not the cohesiveness and continuity of the Bible.

No other book in history has ever been so brutally attacked as the Bible.  In the year 300, the Roman emperor, Diocletian ordered every Bible burned, thinking that by destroying the Bible, he could destroy Christianity.  He also decreed that anyone caught with a Bible would be executed.  Just 25 year later, his successor, Constantine, ordered 50 perfect copies of the Bible to be made at government expense.  Since then various leaders have tried to burn and banish the Bible, yet it remains the world’s bestselling book of all time.

The verse at the very center of the Bible says:

Some things you might not know about the Bibles:

The longest chapter in the Bible is Psalm 119.  The shortest is Psalm 117.

Jesus had four brothers: James, Joses, Jude, and Simon and several sisters[2].  James and Jude wrote books of the Bible which are named for them.

There is an organization that illegally parachutes copies of The Bible into North Korea.

In 2011, 25 million Bibles were printed, compared to 208 million IKEA catalogs.  What does that say about our society?

Have you read the Bible?  The whole Bible?  If you read one page every five minutes, it should take you about 84 hours or just under three and a half days to read it all.  You have probably read many other books cover to cover, but have you read the most important book of all time?

I’ve read the whole Bible several times, and even after several times, I still find things that are new and surprising.  Sometimes God will give me a rhema word, and the words will seem to glow or leap off the page.  How can this be?  Because the Bible is not a book.  The Bible is the Living Word of God disguised as a book.  If you want to find God, you can find Him in the pages of your Bible.  If you want to discover whether God exists or not, then read the Bible.  If you can come away from reading the Bible, still unsure that God exists, it is only because you love your sins more than you love or want to know the truth.  The truth will set you free.  And the Truth is a person you can find throughout the Bible: Jesus.  God is good!

[1] Some people claim to find contradictions in the Bible, but they have to take verses out of context to do so.  When looking at the Bible as a whole and understanding its teachings there are no contradictions.

I just had the strangest miracle happen.  Appropriately for a missionary supporter, the miracle was not for me, but for one of the missionaries that frequently visits my house.

Here’s what happened: the day before yesterday I finished reading An Appeal to Heaven by Dutch Sheets.  It is a very thin, but amazing little book.  God used this book to teach me something incredible about prayer.  Two years ago God taught me about extradimensional prayer (see Vision and Extradimensional Prayer).  Through this book God taught me about synergistic prayer—that is, joining my prayers today in agreement with those of the saints who prayed before me.  As God told Dutch: the person may be dead, but their prayers are not dead.

So, having just finished the book, and given that it is a very thin little book, I know that there was not an envelope in the book when I was reading it.  I would have noticed.  This morning I had a meeting with Julia to strategize about a prayer walk that we are planning.  I told her about the book and gave it to her to read.  As she leafed through the book, I saw a fat envelope in the pages of the book.  I pulled it out and looked at it.  It says Per Giuseppe (for Giuseppe), but written like this: 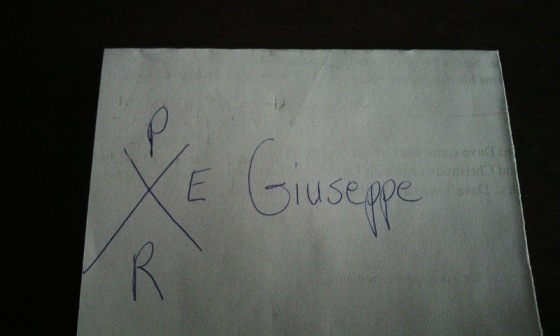 Giuseppe is one of the leaders of the Missione REM organization that has decommissioned city buses.  They made the buses into mobile churches and use them for sharing Jesus out on the streets all over Italy.  When he’s in Milan, Giuseppe stays with me.  He’s an ex-druggie who is now completely addicted to Jesus.

Inside the envelope is €100.  But where did it come from?  The writing on the envelope is definitely Italian, but not familiar[1].  The only people to enter the house since I finished reading the book are:

Beatrice and her teenaged daughter.  They don’t know Giuseppe at all and they don’t have €100.

Sebastian who has stayed with me a few times.  He also doesn’t know Giuseppe and he doesn’t have €100 to spare.

My son, Tim knows Giuseppe, but he doesn’t have €100.  Plus, the handwriting is not his.

Nina, my best friend and housekeeper.  She knows Giuseppe, but she doesn’t have €100.

Julia is the only one besides me who I’ve seen handle the book.  But Julia doesn’t know Giuseppe and doesn’t have €100 to spare.

Nobody else has been in the house since I finished reading that book.  So where did the envelope and money come from?  My only answer: Giuseppe’s Heavenly Father.

Praise God for this mysterious miracle!  And praise God for Giuseppe, who is 100% radically saved and sold out to Jesus!

Even though the money is for Giuseppe, I am thrilled because encouraging missionaries is what I do.  When I notified him about the envelope, Giuseppe kept saying: “Astounding!”  This has really encouraged him.  God used me to encourage Giuseppe and in the process, I looked and felt like a hero, even though in reality, I’m just God’s messenger girl.

Finally, this love letter from God to Giuseppe gave me the last chapter for this year’s book, entitled Love Letters to God.  God always delivers a great closer, and Wow!  This one’s a doozy!  God is good!

[1] The writing in the picture is mine because I changed Giuseppe’s real name.