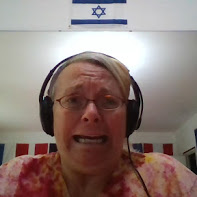 This morning at half past eight, it started: jackhammers (yes, that’s plural.  I distinctly hear two of them!).  We were warned of the “possible disturbance” while our new neighbors on the fourth floor (two flights up from me) renovate their apartment.  For the next hour and a half it was a continuous assault of hammers and jackhammers, destroying the structure of the apartment above, and every nerve in my body along with it.

My ears rang and my patience snapped.  This is a day that I should be very happy about: the shutter repairman is coming.  Since last fall I have been living as if in a cave because the shutters on the door beside my desk have been broken.  They broke in the closed position, which is good, but still then there has been no natural light in here at all.  If it had been up to me, they would have been fixed last fall, but since I am only a renter, I needed the landlord’s approval—especially if the landlord was going to pay for the repair, and that was never a given[1].  Then a few weeks ago, the other shutters in my living room broke, also in the closed position, so the darkness became even darker and more cave-like.

The shutter guy had said that he was coming at nine-thirty.  At ten, I was still waiting in the nerve-shattering gloom.  Then ten-thirty.  Where is this guy?  Did I get the day wrong?  Of course blaming myself comes easy, thinking that perhaps I misheard or misunderstood—it’s so easy to misunderstand in your second language.  Desperate to get something useful done while I wait, I sent a message to my home church, telling them that I really need prayers.

I have three writing tasks that I am trying to work on:

Once I sent my plea for prayers, I started writing (from number two on the list).  The writing flowed with a facility I rarely see.  The shutter guy arrived over an hour late.  He added his own noise and chaos to the jackhammers.  But thanks to the prayers of my Church Family, I was in The Zone.  Despite the noise and chaos, in less than an hour I had a new blog post written and posted.  An hour after that I had a living room full of natural light.

I will never again take sunlight for granted.  Or blessed silence.  Today I found myself desperately craving both like a caged cuckoo bird.  Thank God that there are people praying for me!  God bless each of them!  God is good!

[1] When the toilet flusher wore out (as the kind I have do with age and use), I was told that I must pay the plumber.  I took this as a gross injustice.  After all, I can’t take the plumbing with me when I move out.  I paid the plumber, but then wrote a letter to the landlord saying that I would deduct the €187 from my next rent payment.

The Holy Spirit told me: “Don’t send the letter and don’t deduct the plumber’s fee.  Instead, pray for your landlord.”  As I obeyed His voice, I found genuine love for my landlord growing in my heart.  Ever since, our exchanges have been gracious and kind.  But still, it was never a given that he would pay for this repair.

One thought on “In the Zone, the Cuckoo Zone!”