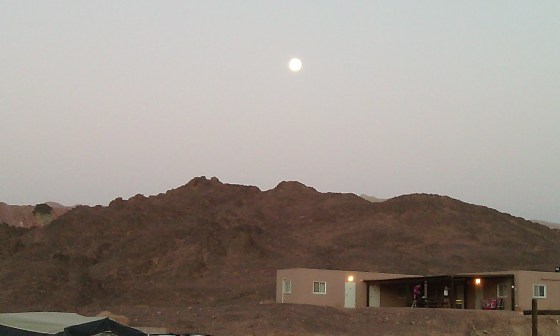 Today is our fourth day at Timna.  We went to the grocery store and bought supplies—and it’s a good thing that we did when we did because Sukkot (the Feast of Tabernacles) begins tonight.  The store—a large supermarket—was closing around us at four in the afternoon.  We barely got our shopping done.

The reason we arrived in Israel five days ago is because in Israel you’ve always got to take Shabbat into account.  They have only the most urgent and minimal things open from Friday evening to Saturday evening.  It’s hard to get used to, coming from the US, where practically everything is open every day of the week—and some are even open 24 hours.  Even Italy is becoming like that now.  In Milan, only the little mom & pop places close for two hours every afternoon.

Today Amit and his family moved out and two new families moved into their tent and the one next to it.  Yesterday Nina had lamented that she had nobody to talk to besides me and God.  And maybe she was getting tired of talking to me.  For my part, I’ve been constantly translating for her, but I don’t mind.  I love having her here, and I know that she puts everything she’s told before God in prayer.  Still, I wanted to comfort my friend, so I said: “God will send someone who speaks Spanish.”

Our new neighbors came over to us offering little cups of scotch whiskey and friendship.  When I explained that Nina speaks only Spanish and Italian, one couple, Moshe and Yael, launched into a Spanish conversation with Nina.  I had trouble understanding the Hebrew-accented Spanish, so I spoke with the other couple, Igal and Mindy.

Later Nina explained that Moshe and Yael actually met in Colombia, so they love finding someone to speak Spanish with.  Nina was impressed with my prophetic powers, but of course, it’s not me, it was the Holy Spirit.

All of them are Israeli, except that Mindy was born in the US.  So the four of them and the two of us, and their six daughters (three from one couple and three from the other) all hit it off like a house on fire.  They invited us to have dinner with them, explaining that they were celebrating the birthday of Yael and Moshe’s eldest daughter’s tenth birthday, and they had made too much food.  That was the truth.  Even with all of us having our fill, there was still a lot of leftovers.

Yael and Moshe spent the evening sharing fond memories of Colombia with Nina, while Mindy and I talked about the life as Americans transplanted abroad.

Yael and Moshe had also brought their Jack Russell puppy.  They didn’t keep her on a leash, but she had responded well to training and didn’t ever go very far from the family.  Whenever she did wander a bit, she always came back immediately when called.  Of course, the little girls played with her a lot.

Igal told me that the two families go on vacation together twice a year.  I noted that their girls all correspond in age pretty well.  They agreed that it was a very fortunate—and fun-filled—coincidence.  Of course, I don’t believe in coincidence.

As the evening wound down, Igal asked me what we have planned for tomorrow.  I said that we don’t have anything planned.  He didn’t like the sound of that.  I guess when you’ve got six little girls to keep amused, it’s far more important to have some kind of fun activities planned.  But honestly, I just don’t know what there is to do around here besides hiking (not such fun for a fair-skinned person like me under the desert sun) or going to the Red Sea beach at Eilat (again, grave risk of sunburn).  But Igal said that there are lots of things to do in the area.  One thing he suggested sounded very intriguing, and if it’s open tomorrow, we’ll go to Hay-Bar.  It’s a drive-thru nature reserve featuring Israeli wildlife.

How fun it is to find new friends!  They will be here for the next few nights.  God is good!