After Riga we traveled to Vilnius for the third part of the OCE[1] trip.  Ketty had said that Vilnius was worse than Riga for the spiritual heaviness.  We met with the local YWAM[2] team to learn some of the spiritual history, and share a meal.  The bus ride gave my ankle a chance to rest[3].  The bus ride was only a couple of hours.  I did what I usually do when traveling: I put in my earbuds and listened to worship music on my MP3 player—I have it in 5 languages: English, Spanish, Italian, Portuguese, and Hebrew.  I slept a bit, too.

When I arrived and checked into the hostel, I thought I would just lay on my bed a pray a while.  Instead I fell very deeply asleep for about an hour.  Then after supper I had a full night’s sleep.  Sounds like I needed it!  I felt great the next day, and I even had a dream[4] for Lithuania.  I saw a long line of people, walking three or four abreast.  They were walking with purpose, but not out of fear.  I got the sense that it was a matter of national/cultural importance.  I’m not sure what it meant, but I prayed about it in the spirit.

That day, being Sunday, there was a church service we were invited to.  They always say that it’s optional, but I like to go.  I love hearing worship in different languages (as evidenced by my MP3 player).  And the bonus is that it is encouraging for the local believers to see new people visit the church. 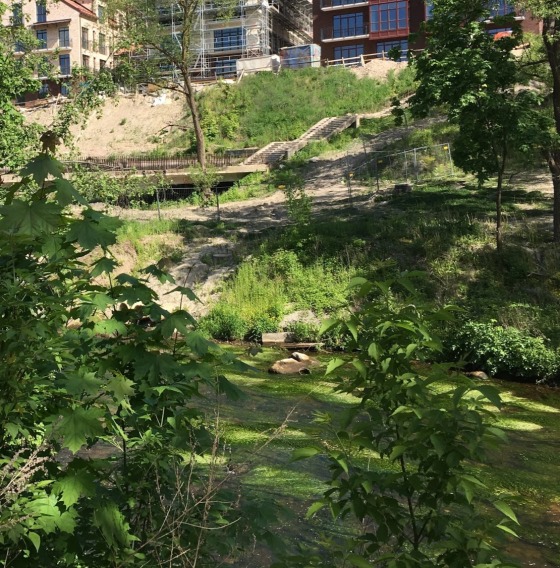 The footbridge through the construction site and across the river.

But I had a bit of an adventure on the way to the church.  The automated announcements of the bus stops was not in synch with the actual stops, so I found myself far off course.  I got off the bus, crossed the road, and caught a bus going back toward town.  This bus let me off just across the river from the church.  My navigation software had me go to a construction site to cross the river.  Even though it was Sunday morning, there was a guard in the office.  I told him my dilemma, and he opened the gate and walked me through the construction site to a footbridge across the river.  He called his colleague, who unlocked the gate for me on the other side of the river.  The guard pointed down the dirt road to my left, which was what my navigation software was saying, too.  I thanked him and followed the dirt road as it went deeper and deeper into the woods, getting narrower as it went along.  With a deep sense of foreboding I saw that the navigator indicated the dirt footpath to my right.  There was a fenced yard in that dark corner and suddenly two dogs lunged at the fence, barking and snarling menacingly.  I said a two word prayer: “Dear God!” and was grateful to see that the fence held.  I went up the path, which eventually opened up back into the sunlight.  At the top of the path I saw a building with people inside, assembled in rows.  I had found the church. 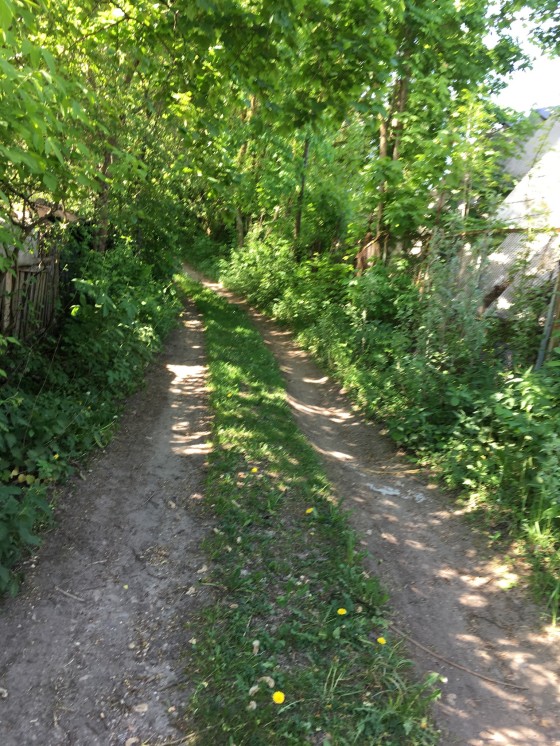 My foot and ankle were not at all swollen even after my adventure in the Valley of the Shadow of Death.  That makes me think that it was an attack by local spirits in Riga.  Lars had told me that pain or swelling in the leg from the knee down means battling in prayer.  He also mentioned how strong the water spirits of Riga had been.  That was when I realized that water had been nearby or involved in both instances of my recent irritability: one in the shower and the other was by the river[5].  Of course I bear the responsibility for my actions and responses to stress, but I can see that I was definitely influenced.  And God had warned me that I needed to stay very close to Him on this trip.  I had thought I was doing that, but apparently not as close as I should have been in order to avoid it.  That’s the thing with going in and doing this kind of prayer work: there is opposition, and sometimes it is very strong.  But nothing is stronger than our God.  He has been talking to me for the past few weeks about our position of victory: that we don’t have to go running after the defeated enemy to fix what he has messed up.  Instead, if we simply stand our ground, stand on the Word of God, and keep His praise on our lips, we cannot possibly lose.  Every battle is really a blessing because it makes us stronger.  God doesn’t allow anything to touch us that is not ultimately for our good, as long as we’re submitted to Him.  Where we get in trouble is when we go running off, doing our own thing.

Concrete triple cross atop a hill in Vilnius.

The following day we prayed at the high places and down by the river.  It was a lot of hill-climbing.  One teammate has a Fitbit that reported that we climbed over 2500 stairs—that’s over a mile!  It doesn’t seem like the hills are so high, but there are three of them.  I’m glad I didn’t know that before we started.  Sometimes the hardest part of this work is between your ears.  I was really grateful that my foot and ankle didn’t suffer with all the climbing.

Putting the pagan altar under our feet in prayer.

At the top of one hill we prayed against a pagan altar that had been used in ancient times to burn ritual sacrifices.  In recent times interest in the altar has revived and people have sacrificed animals on it.  Lars rested his foot on the altar, asking: “How shall we pray here?”  I said that I liked the idea of putting the altar beneath our feet, so we all put a foot on the altar.  I was specifically led to pray that if anyone is interested in going up to the altar to do rituals, they won’t be able to find it.  A few minutes later, a couple covered in tattoos and both wearing black came up the hill.  They walked all around the altar, but never once looked directly at it.  I believe that they just didn’t see it—or us!  After a minute, they went back down the hill.  I know invisibility is something God can do for us[6], so why not ask Him to make a place invisible? 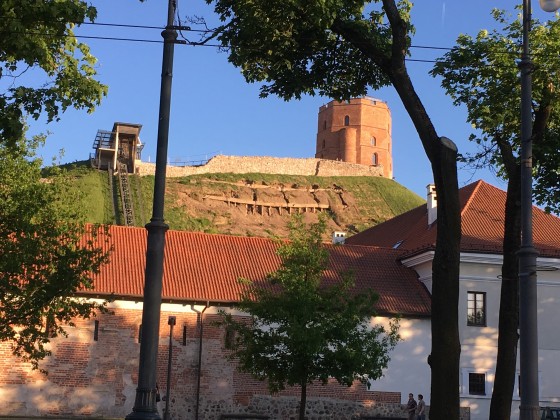 At the river, looking up at the castle hill.

We ended the day praying by the river, and just as our prayers finished I felt a little spirit slide by me.  I should have rebuked the thing, but I was tired and didn’t feel threatened by it.  The next day was when I started coughing[7].

The locked gates of the Lithuanian Parliament building.

The following day we prayed at Parliament, which was so different from Parliament in Latvia, where we were able to sing, worship, and pray inside the Parliament building[8].  In Vilnius we not only could not go inside the building, but we couldn’t even get very near the building because there was a gate that was closed and locked.  So we prayed as close as we could, and then went for an ice cream.  Thus ended the OCE Baltics trip.

The best part of the trip for me has been getting the opportunity to encourage the individual teammates and local believers.  I met a Latvian filmmaker in Vilnius who is very interested in meeting Deborah.  I love connecting people!

Lithuania is so different from Latvia and Estonia.  It is a very Catholic country, and for that, it’s harder for missionaries than in the other two that are secular and/or atheistic.  But there is a small contingent of charismatic Catholics in Lithuania, so there is hope!  We visited a Mennonite Brethren church.  They told us that they are the wild Mennonites.  I’m not sure what that means, but it made me laugh.  They meet in the Russian Pentecostal church’s Bible school building.  That impressed me: cooperation between denominations in Lithuania—in fact in all three of the Baltic countries.  That’s makes the Baltic countries very different from Italy, where even within denominations there remains suspicion of other churches.  It is getting better, but Italy still has a long way to go.

Even though the OCE trip had ended, I was staying an extra day and a half before going back to Riga to visit friends.  Angela also stayed an extra day, and we made plans to go to a castle on the lake near Vilnius that evening, then to the original capital of Lithuania the following day.  But that’s a post for another day.  Despite the difficulties and opposition, we felt that this trip had gone very well.  I love working for God where the work doesn’t feel so much like work, and the best part is meeting new friends.  God is good!

[3] See Baltics Trip Latvia.  It didn’t bother me for the rest of the trip.

[6] See The Retroactive Power of Invisibility.