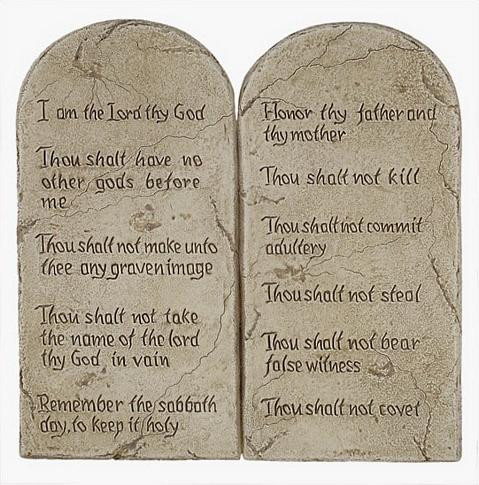 In the Bible there are laws—God’s commandments—which must be obeyed, and there are rules.  My question to God this morning was: what is the difference between a law and a rule?  The Bible gives us Ten Commandments (above), which Jesus summed up into two:

You must love the Lord your God with all your heart, all your soul, and all your mind.  This is the first and greatest commandment.  A second is equally important: Love your neighbor as yourself.  The entire law and all the demands of the prophets are based on these two commandments, (Matthew 22:37-40[2]).

The King James has the Sixth Commandment as:

You may be wondering if this means that killing is forbidden in every circumstance, and certainly there are denominations that believe this is a total ban on the killing of all creatures.  But if you look at the more contemporary translations, almost all of them render the Hebrew word רצח (retz-ACH) as murder.  While killing is the act of ending the life of another living being (human or animal), murder is the intentional, premeditated killing of another human being with malice.  Take war, for example.  In the vast majority of wars the combatants don’t even know each other.  They kill because they are commanded to do so and also because in the moment, it’s usually a matter of kill or be killed[3].

And what about lying—the Ninth Commandment?  Is it always wrong to lie every time?  The philosopher, Immanuel Kant[4] wrote in several works that it is always wrong to lie.  St. Augustine and John Calvin agreed with Kant.  This one takes wisdom, and again, it’s a matter of intention.  Is the lie self-serving?  In other words: are you lying to cover up some wrong-doing of your own?  Rahab lied[5] and she is listed as a heroine of the faith[6].  Her lie was self-serving in that it saved Rahab and her family from death.  But the lie must have been inspired by God because she is one of the few women listed in the lineage of Jesus[7].  So it must have been God’s plan all along to save Rahab so that she would raise up a godly son, Boaz.

I think lying is to be avoided as much as possible.  If someone walks in wearing an ugly dress, I don’t volunteer my opinion that it’s ugly.  That would be hurtful and it would be cruel to sacrifice someone’s feelings for the sake of honesty.  So the best thing of all is simply not to say anything about the ugly dress.  But if the wearer asks what I think about the dress, I try to find a way to answer that is both honest and doesn’t hurt the person’s feelings: “You look very fresh and cool in that dress;” or “You look ready for a party;” or “That color is pretty on you;” or “That’s my favorite color—all of them!”  There are lots of ways to give an answer that is both kind and honest.

Finding a kind and honest way to answer applies equally if someone besides the wearer asks what I think of the dress.  I believe that gossip is part of the Ninth Commandment.  In fact, gossip is often called character assassination[8], and as such could also be part of the Sixth Commandment.  After all, if you destroy a person’s reputation you destroy his or her ability to live a normal, peaceful life.

Back to my question: what is the difference between a law and a rule?  A law, as I noted, is to be obeyed in all but a few cases.  A rule is more flexible.  If followed, the rules will help you live a healthier and more peaceful life.  For example, the prohibition on pork.  God has provided us many good foods that are good for us, but pork isn’t one of them.  God doesn’t deny us pork on a whim.  The pig is a scavenger and not good for human consumption.  Leviticus chapter 11 lists several kinds of animals that are unclean, but the pig is especially filthy.  Pigs function as living garbage disposals[9].  They will eat pretty much anything they find: bugs, trash, moldy food scraps, their own feces, and rotting carcasses.  Pigs will even their own young.  Compare that with cows and sheep that eat grass and nothing else[10].

Nobody is going to hell over pork chops or bacon.  But eaten habitually over the years, a diet of pork could damage your health over the long term[11].  So the ban on pork is a rule, but not a Commandment.  Obeying the Commandments is absolutely essential.  But obeying the rules is a good idea.

One last thought on Commandments: I have studied and sought the Lord and come to the conclusion that the Fourth Commandment (to keep the Sabbath holy) is not optional.

For assuredly, I say to you, till heaven and earth pass away, one jot or one tittle will by no means pass from the law till all is fulfilled, (Matthew 5:18, NKJV, emphasis mine).

If you’re reading this, then I think we can agree that heaven and earth have not yet passed away.  Therefore all of the Ten Commandments still stand: Sabbath rest as much as no murder.  We know that the first century churches met on Saturday and also on Sunday, and perhaps every day of the week, though Saturday remained the Sabbath.  Roman Emperor Constantine legalized Christianity in the fourth century.  I believe that this was simply a case of if you can’t beat ‘em, join ‘em—or better yet, take ‘em over.  It was this pagan emperor who started the papacy, and it was he who made a law changing the Sabbath to Sunday.  He did it to honor the sun god—the one he was still worshiping.  He also did it as a way to make Christianity less Jewish by making Saturday a required workday, and Sunday the day of rest.

But every church I’ve ever loved worships on Sunday.  What to do?  What I do is fast and rest on Saturday.  If I’ve got work to do, it will wait for another day.  I don’t observe the Sabbath in the strict way that the Jews do.  If I need to drive on a Saturday, I drive.  If I need to cook, I cook.  But in general I do try to avoid those activities, too.  Saturday, in my opinion, remains the Sabbath.  However, that doesn’t mean that you can’t go to church on Sunday.  I take a Sabbath rest on Saturday and go to church on Sunday.

I’m not trying to be legalistic about the Sabbath, but Jesus was very clear in the verse from Matthew (above) that all the Commandments remain as long as heaven and earth remain.  Or do you want to try and convince me that the other Commandments are also optional?  Is it now okay to commit murder or adultery? or to blaspheme the name of God?

The thing about the Fourth Commandment is best summed up by Jesus, Himself:

In other words, the Sabbath day of rest is for our benefit.  God knew that the defeated enemy would have us working like slaves just stay afloat.  Look at all the time-saving devices that we have that have become burdens, requiring many hours of work to pay for, protect, maintain, clean, repair, and replace when they wear out.  God has given us a day to get off the hamster wheel, and He will provide for those who refuse to work on the Sabbath as He did for the Israelites in the wilderness[12].

Follow God’s rules and obey His Commandments.  Trust in God’s goodness to provide for you.  After all, like I always say: God is good!  Believe it!

[3] In the case of crime, it may or may not be a matter of kill or be killed in that precise moment.  Capital punishment is endorsed by the Bible in cases where it would be unthinkable in our world today, like disobedience to parents.  Given the deep flaws in our government (and indeed in every human government that doesn’t seek to obey the precepts of God), I find it hard to agree 100 percent with capital punishment.  Capital punishment has been proven not to be the deterrent that it is supposed to be.

[4] Kant was raised in a Pietist (rigid Lutheran) home, so he was raised Christian, though a legalistic breed of Christianity.  I would call him more of a moralist than a Christian, based on his book Critique of Pure Reason, which has been called the Agnostic Bible.  Kant embraced a rigorous set of ethics based on duty, which I’m sure was the result of being raised in such a legalistic Christian tradition.

[8] For an interesting and in-depth look at gossip from a Biblical point of view, check out 8 Types of Gossip.

[9] Which is a necessary function for a healthy planet.

[10] At least if left to their own devices.  I think it’s a real shame that cows are kept penned up in feed lots and fed genetically modified corn nuggets laced with growth hormones and antibiotics.  Is it any wonder that children are reaching sexual maturity as early as age ten and resistant strains of bacteria cause mass infections like the MRSA bacteria that is so commonplace in hospitals today.

[11] A pig’s digestion takes only four hours to absorb what it eats.  Compare that to the cow that takes up to 24 hours.  During digestion toxins are eliminated from the food, so a pig is literally what it eats—toxins, viruses, antibiotic-resistant microbes, parasites, and all.