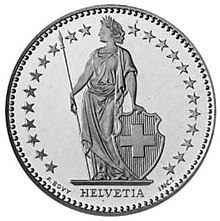 Helvetia is on the Swiss money.

Being here in Switzerland, I began to wonder about the meaning of the name Helvetia[1], which you see everywhere here.  So I looked it up.  Helvetia is a female personification of Switzerland.  She was originally Abundantia, but evolved into Helvetia.  The abbreviation for Switzerland, CH, stands for Confederatio Helvetica—the Helvetic Confederation.  If you look at depictions of Helvetia, she looks like Lady Liberty.  Sadly, Lady Liberty doesn’t have a good history.  She was built by a Freemason, and has lots of illuminati secrets[2].  Helvetia may be related.

All this was on my mind as I headed out this morning.  An organization that God has been talking to me about for a few years is the Club of Rome.  The Club of Rome, the Committee of 300, and the Bilderbergers are all transnational illuminati elitists that see the rest of us as sheeple—stupid sheep people who are easily fooled and easily distracted.  And each of these organizations seeks to decrease world population by 80 percent—no matter what it takes.  They especially hate the American Middle Class, who they consider to be the epitome of sheeple and a danger to the planet[3].  This is why they use symbolism and hide things in plain sight.  When you start to see these things, you can’t un-see them.  I couldn’t be this close to the Club of Rome headquarters and not go there.

Just inside the door of the building where the Club of Rome is headquartered.

So I got a roundtrip train ticket to Winterthur, where their headquarters is.  I had to change trains in Zurich, which gave me an idea of what to do after I finish in Winterthur.

In Winterthur my GPS took me on a roundabout route to the Club’s headquarters.  In the park near the train station I got my encouragement: a hat.  It’s not fancy or expensive.  Someone must have dropped it and someone else, finding it, put it on the fire hydrant.  I took the hat and then found the Club’s headquarters.  It was early, only about 8:30 in the morning.  A couple of people were out in front of the building, smoking.  I approached the door, praying for invisibility, and got in.  The Club was on the second floor.  There was a doorbell, and often places like this will only let you in when you ring.  But I felt the Holy Spirit telling me “don’t ring.”  I reached for the door, and opened it.  I could hear people in the back, but saw nobody, and nobody saw me.  I walked down the hall and saw a picture of Gorbachev on the wall.  Gorby seemed like a good guy because Communism crumbled under him.  But he’s high up in the illuminati secret societies.  And evidently he’s working in cahoots with the Club of Rome. 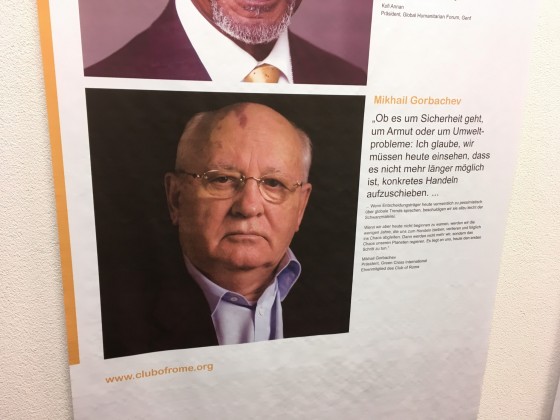 Gorbachev on the Club of Rome’s wall.

So I prayed that their plans would come to nothing.  Then I found the bathroom, used it, and took a selfie wearing my hat.  As I left, I thanked God for invisibility. 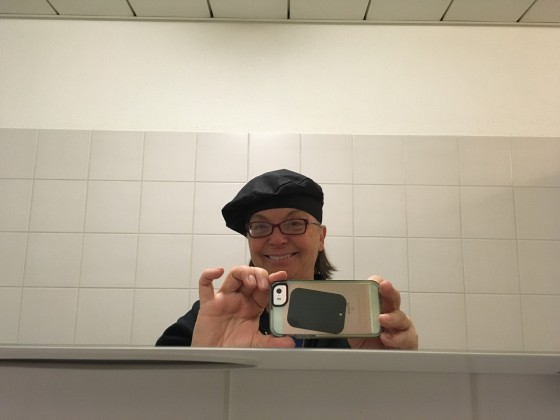 Bathroom selfie in my hat from God.

On the way back to Zurich, I checked my notes and saw that it would be really easy to hop on down to Lucerne before going back to Basel.  In Lucerne there was a covered bridge called the Dance of Death Bridge.  I had found out about the bridge through a website called Atlas Obscura.  I had been repelled at first by the name of the website.  But it kept popping up as I did research.  Finally I took a look and found it to be a very useful resource for finding places that need prayer.  Atlas Obscura has Cern in its list[4].  That was what decided me to sign up with them.

Dance of Death Bridge in Lucerne.

The Dance of Death Bridge is the kind of thing I see a lot in Europe’s Catholic Churches.  The Catholic Church is a death cult—just look at the crucifix.  That’s not to say that Catholic people are bad.  But the institution is deeply flawed from its foundation.  So I crossed the bridge softly singing He’s Alive[5]. 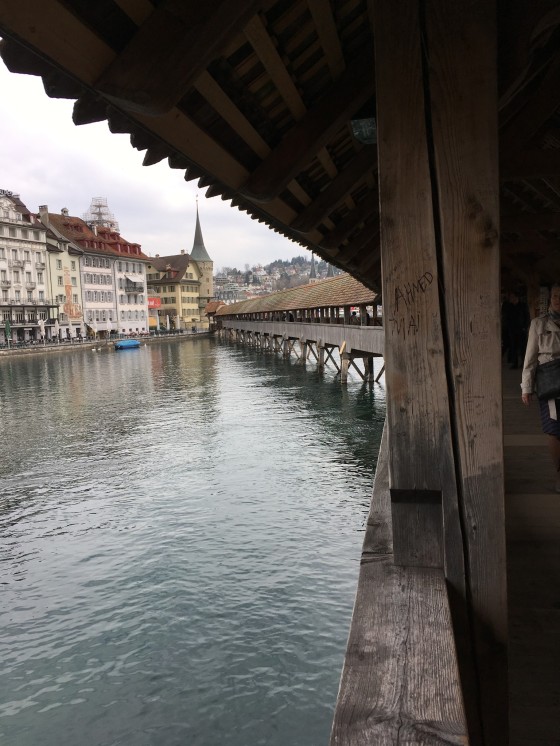 It’s quite a long bridge with two bends and a tower.

At the train station I couldn’t find a listing for a train to Zurich (perhaps there would be one in a couple of hours).  But I did find a train to Basel leaving in just a few minutes[6].  On the train I wondered what the conductor’s reaction would be.  I had two roundtrip tickets: one was for Basel to Winterthur (by way of Zurich) and the other Zurich to Lucerne.  I didn’t exactly have a ticket for the train I was on: Lucerne to Basel.  The conductor looked puzzled at my two tickets.  And I explained that I had gone from Basel to Winterthur, and when I changed trains on the way back in Zurich, I had gotten a ticket from Zurich to Lucerne.  I smiled and said, “It probably cost me more this way.”  And he agreed, stamping my ticket.

Selfie on the modern bridge with the Dance of Death Bridge behind me.

On the way back to Basel, I took a quick nap[7] as the lovely farmland rolled past my window.  Switzerland is a really beautiful place.  I long for the Swiss people to know Jesus.  Beautiful as Switzerland is, nothing is more beautiful than knowing Jesus.  God is good!

[1] Switzerland calls itself the Helvetic Republic, and you see the name Helvetia on the money.

[3] Or more likely to their ultimate control of the planet.

[4] The Atlas also has the Dangerous Crossing listed (see A Sunny Sunday in Basel).

[5] Inspired by my church’s Founding Pastor, who belted it in the Easter program last week.

[6] God has granted me a transportation anointing, and often I find the transport I need at precisely the time I need it.  This is something I began thanking God for before I saw it start to happen.  And that is what faith looks like.

[7] The ability to sleep sitting bolt upright is part of that transportation anointing, and I’m very grateful for it.

One thought on “My Day on the Trains”