Last night there was an announcement at church about helping with the relief effort for Florida in the aftermath of hurricane michael[1]. Tim and I decided that we would go help out. So this morning we arrived at the designated warehouse used by Heart with Hands, a local relief organization. At the entrance was a sign-in table with name tags. After signing in, we were directed to a place in the middle of the warehouse, where toiletries were being sorted into bins marked men’s deodorant, family toothpaste, individual soap, etc.

After sorting toiletries we were assigned to open cartons of food donated by the large local grocery chain. Some of the cartons had smaller boxes inside, like boxes of granola bars, while others had canned good inside, like soup. Once opened, the foods were put into boxes or bins for distribution.

I spent the rest of the morning opening gummy fruit cartons, gummy fruit boxes, and putting the gummy fruit packets into a box. I also flattened the boxes and the cartons as I went along, even though there were people doing nothing but flattening boxes for hauling away. As I worked, I found myself next to a young girl who was wearing a Heart with Hands T-shirt. So I asked her about herself. Kimmy said that she is fifteen and homeschooled at her small town about an hour from Asheville. She told me many of the people there were people from her church. I told her that I’m a missionary, and we talked about missions. Kimmy and her family had gone on a mission trip to Costa Rica last year. She said that her church, though small, is a big supporter of missions. I said, “Mine, too!” It is so refreshing to hear about churches that have a missional focus.

Kimmy pointed out her mom and sister to me. They were working halfway across the warehouse from us—about 100 yards away. When we finished our tasks, Kimmy took me to where her mom and sister were, and we got to work helping them sort diapers into baby bins and pet food into another bin.

Just before lunch I joined Tim and others at the box assembly station. They were assembling boxes for distribution to individuals. The boxes were a little taller and bigger than a shoebox, and printed with pictures of people with encouraging sayings, and the Heart with Hands name and logo. Tim demonstrated for me how the boxes are assembled, and we put several together until a lunch break was called.

Tim and I had assumed that we would just go to a fast food joint down the road, but Kimmy’s mom had made us all hamburgers and spaghetti. It was nice to get a chance to sit down. I hadn’t realized how tired I was until I sat. After lunch we got back to work and finished assembling all the distribution boxes.

The truck that was supposed to bring some final items for the distribution boxes had been delayed. So we finished sorting some odds and ends, and I got to talk with a few other people there. After waiting about two hours, someone in charge decided that we should put the stuff that we could into the distribution boxes, and when the truck arrives, the last items could be added. So we constructed an assembly line and put into each box: 2 bottles of water, a can of soup, a can of spaghetti, a can of mini sausages, 2 granola bars, 2 gummy fruits, and various other items. The bins were lined up, and a group of volunteers stood behind the bin tables, restocking the bins as needed while the rest of us took a box at a time down the line, filling it as directed, and leaving it open on the last table, where other volunteers stacked them to await those final items.

As the boxes were filled and the day came to a close, volunteers began to trickle out as they had trickled in this morning. Finally, around five, Tim and I agreed that we had done all that we could do for one day. It’s been a physically exhausting day full of hard work, but also very rewarding. Whenever I thought I was too tired to go on, I thought of the people who would be receiving the boxes. That thought kept me going. I prayed throughout the day, since most of the jobs were not conducive to conversation.

I have told you all this so that you may have peace in Me. Here on earth you will have many trials and sorrows. But take heart, because I have overcome the world, (John 16:33).

This was their turn, another day it could be our turn. But thank God we don’t have to go through it alone. God is good!

[1] As many of you know, I refuse to capitalize organizations, objects, and events involved in witchcraft. I don’t know if there was witchcraft involved in this hurricane. Rather I refuse to dignify this destructive event with a capitalized proper name. I understand that it’s easier to remember hurricanes by names like this, rather than numbers, but there’s just something not right about anthropomorphizing a hurricane. 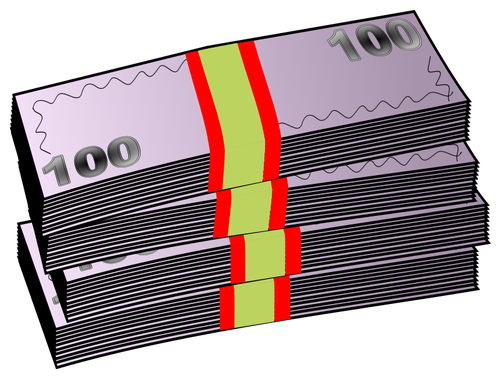 Guess what: it’s not all about the benjamins!

This is probably one of the most frequently misquoted Scriptures of all times. People leave out those first three words and reduce it to “money is the root of evil,” as if something inanimate could really be the thing that brings all kinds of evil into this world.

But it is the love of money. Some people love money more than they love their spouse and children. I think this is why we see so many workaholics and gamblers. They are two sides of the same money-loving coin.

And many people trust money more than they trust God. This is because money is a god that they think they can control. Of course, money is probably the most fickle god there is. Riches can slip through your fingers all too easily.

Something that God has had me praying about lately is deception in the church. Of course you’re too smart to be drawn in by the prosperity gospel, and the deception that God will make you rich if you tithe. It’s true that God will bless tithers, and He will prosper you. But God’s idea of prosperity is different from ours. I’m sure that you have heard of the law of first mention, that the first time a word is used in the Bible it characterizes that word for its subsequent uses. The first use of the word prosper in the Bible has nothing to do with money:

But [Abraham] said to me [Eleazar], “The Lord, before whom I walk, will send His angel with you and prosper your way; and you shall take a wife for my son [Isaac] from my family and from my father’s house,” (Genesis 24:40, NKJV, emphasis and clarifications mine).

Abraham sent his servant Eleazar to find a bride for Isaac from among his relatives. Now, Eleazar could have spent months looking for the right family, but instead, God led him right to them. The family might not have had a young woman for him to marry, or Rebecca might have been too young, or might have been too ill (or ill-tempered) to go with him. Or Eleazar might have been attacked by bandits and robbed. Or Eleazar might have gotten sick along the road. You see, a thousand things could have gone wrong on this mission, and Eleazar knew it. But God prospered Eleazar’s way, just as Abraham had said—and it had nothing to do with money. This is the true prosperity gospel right here. I want God to prosper my way just like he did with Eleazar.

And even though most of us are not falling for the prosperity gospel, nevertheless many American Christians still think that their money can keep them safe in a crisis. How many of the 3000 people killed on 9/11 were able to save themselves by their money? Do you think that they would if they could? Of course! Sometimes bad stuff just happens—and it happens to good people as well as bad people. Jesus told us that there would be trouble in our lives (John 16:33). And if you’re living an authentically Christian life, you’re going to get push-back from non-Christians. Look at Paul, the super-apostle. He was being obedient to God, and he got stoned and shipwrecked and snake-bit and jailed and all sorts of crazy things. He didn’t get rich, but God did prosper his way. The exponential spread of the Gospel that has lasted to this day is evidence of that.

But let’s go back to 1 Timothy and look at that verse in its context:

True godliness with contentment is itself great wealth. After all, we brought nothing with us when we came into the world, and we can’t take anything with us when we leave it. So if we have enough food and clothing, let us be content. But people who long to be rich fall into temptation and are trapped by many foolish and harmful desires that plunge them into ruin and destruction. For the love of money is the root of all kinds of evil. And some people, craving money, have wandered from the true faith and pierced themselves with many sorrows. . . . Teach those who are rich in this world not to be proud and not to trust in their money, which is so unreliable. Their trust should be in God, who richly gives us all we need for our enjoyment. Tell them to use their money to do good. They should be rich in good works and generous to those in need, always being ready to share with others. By doing this they will be storing up their treasure as a good foundation for the future so that they may experience true life, (1 Timothy 6:6-10, 17-19).

Our attitude toward money should be that it is a useful tool—and especially a tool for spreading the Gospel, but our love and trust must be only in God. Without God, even the wealthiest people are hopeless. God is good!