Yesterday we went to the balcony where Hitler addressed Austria as the leader of Germany and the Nazis.  There we prayed and proclaimed that no more lies would come from that place, but only words of righteousness and truth.  I was standing by a very evil-looking sculpture that had a beak like a bird.  In Budapest one of the locals had given me a rubber bracelet that I have been wearing ever since.  I put the bracelet around its beak as a symbolic/prophetic act to shut the mouth of lies.

I shut his lying mouth!

Next we went to the Austrian Parliament building, but we had no connections, so we were not able to get in past the lobby unless we entered as part of a tour group.  If we did that, then we would not be able to stop and pray, so we went outside the building and prayed from there.  Our hosts told us that there is no Christian in the Austrian Parliament at all—perhaps in name only.  It was a difficult place to pray from.  The Hitler balcony had been prayed over many, many times, but the Parliament had obviously been neglected in prayer.  It was the most difficult prayer session since that first evening in Vienna (see God is Doing a New Thing). 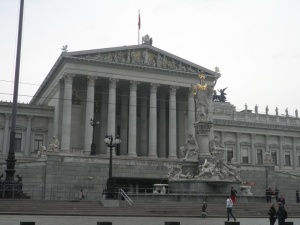 After lunch we had our debriefing, and all of us had felt the same difficulty praying at the Parliament building.  I had 2 impressions about Austria.  The first one I noted in my blog yesterday (An Emotional Day), about how in prayer my emotions had been up and down and up again—but only in prayer.  And I noted, as on the first day (God is Doing a New Thing), that I believe Austria has a female identity—and may I add, that she seems hormonal.

My second impression about Austria is that it seems to me very strange that there was no indigenous Austrian who went to pray with us.  They did pray with us in the church, but not out in the city.  To my knowledge, this was the first time that only foreigners prayed in the capital.  However, I have not been on all the prayer trips, and I was told that it was also this way in Luxembourg.

The thing is that Operation Capitals of Europe (OCE) does not come in to do our own thing.  Rather, we want very much to come alongside the indigenous believers to support them in what (we hope) they are already doing.  Otherwise nothing lasting will result from our prayers because we cannot possibly return and return and return to pray for their capital—there are something like 50 capitals in Europe (not all are recognized, like Cardiff, which comes under the UK, but is in fact the capital of Wales).  Anyway, we did our best, and the local believers did seem encouraged by our visit and our efforts.  Much remains to be done in Austria, but we did what we could to help things along.

Last night the team said their goodbyes to the local church, and today we said our goodbyes to each other.  I have returned to Bratislava to meet with a missionary here, then I will go to Budapest tomorrow, and fly early Sunday morning back to Milan.  It has been an interesting time, and there is still so much to pray about.  If you would like to pray for us, here are a few prayer points:

All in all, I feel like this has been a very good trip—a challenging trip, but very good.  God is good!

Yesterday we went to the Senate building to pray for the Welsh Parliament.  The building is right at the docks, which historically have economic importance for Wales, being the place where so much Welsh coal was shipped to the rest of the world.  The demand for coal declined and the docks became a derelict area.  In 2005 the docks area underwent a transformation.  And now it’s a great place for people to meet and have a meal.  For our purposes, it was a great place to come and pray for revival in Wales—specifically, for a revival that will dwarf the previous revivals that started here.

In this beautiful setting in the capital of Wales, I found that for some reason I was having some trouble focusing and praying—the reason I’m here.  So in desperation, with my mind wandering this morning I finally said, “Lord, please tell me what to pray!” Sometimes desperation leads to wonderful contrarian things:

All my life, the thing that was guaranteed to anger me was to be called stupid or treated like I’m stupid.  And there have been plenty of people who have thought me stupid.  When I lived in California as a child, the other children teased me and called me stupid because of my Texas accent.  In New York as an adult, people occasionally mimicked me because my accent made me sound stupid to them.  Their logic being that you might be a stupid redneck because you sound like Jeff Foxworthy.  In Italy, people sometimes mistake my slow speech (Texas drawl in Italian) for a slow mind, and try to take advantage of me.  So for me to pray for a faith so smart that people think I’m stupid is inspired by God because I would never ask to be taken for stupid.  But God’s wisdom turns the wisdom of the world on its head.  And one thing I am ready to embrace above all others is God’s wisdom.

Recently I wrote a blog post about God’s contrarian logic:  https://europeanfaithmissions.wordpress.com/2012/06/18/contrarian-kingdom/.  And in true contrarian, non-conformist fashion, I love the idea of asking for something that in my flesh I never wanted.  But there it is:  I want a faith so big that people in their flesh think I’m stupid.  It’s turning the world’s logic on its head.

Come on, people of God!  Let’s live a life that’s absolutely contrary to the world’s way!