Yesterday I heard an interview with Jonathan Cahn on YouTube.  Cahn is a Messianic Rabbi and the author of The Harbinger.  The interview was on Sid Roth’s show It’s Supernatural!  What he shared was that George Washington’s first act as the first President of the United States of America was to pray that America would always follow God, and always enjoy God’s protection.  That prayer was prayed in the site of the nation’s original capital: at the corner of Ground Zero in New York City.

That prayer constituted a covenant relationship between the United States and God.  It is abundantly obvious that God kept His part of the covenant, blessing America above all other nations on earth.

Beginning with removing prayer and Bible reading from public schools, America has abandoned its covenant with God over the last 50 years.  After the horror of 9/11, David Wilkerson said that God had issued the US a warning that He was lifting the hedge of protection, and he cited Isaiah 9:10, which says: “The bricks have fallen, but we will build with dressed stones; the sycamores have been cut down, but we will put cedars in their place,” (ESV).

Interestingly, Isaiah 9:10 is exactly what the politicians all said in the aftermath of 9/11.  This verse sounds like the good old American indomitable spirit, but for 1 thing: it quotes what Israel said when God lifted the hedge of protection.  Instead of turning back to God and seeking Him, they vowed to rebuild bigger and better than before, using stronger materials.  It is the indomitable spirit—the spirit that refuses to bow to God’s sovereignty.

What came next for Israel was invasion and utter destruction by their enemies.  What comes next for America is something similar or worse.  If we stay on this course, there will only be a small remnant of Americans left, and our country will be left devastated.  Most likely, Americans will be scattered across the globe.

Look at how we have actually set ourselves up for disaster: Our public buildings are almost without exception owned by foreigners.  Farmers are required to buy seed that produces no seed, so farming is no longer sustainable in America.  The economy is no longer based on gold, but now it’s based on paper currency, which is a house of cards waiting to fall.  Iran is very close to having missiles capable of delivering a nuclear warhead to the east coast of the US.  And we are on their target list right behind Israel.  We keep talking to them about peace, but they are not interested in peace.  They must start a war against Israel and America so that the 12th Imam, the Mahdi—Islam’s Messiah—can appear.  And that is all that they are interested in doing. 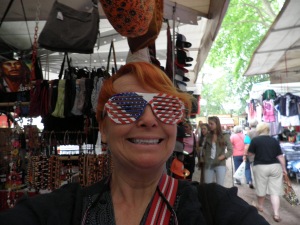 Somehow people always spot me as an American!

There are enough Christians to swing politics back onto the right track, but we’ve got to quit voting our wallets and start voting according to Biblical values.

A good example of a truly humble and repentant prayer was prayed by Daniel, of whom no sins or blunders are recorded: “We have sinned and done wrong.  We have been wicked and have rebelled; we have turned away from Your commands and laws.  We have not listened to Your servants the prophets, who spoke in Your name to our kings, our princes and our ancestors, and to all the people of the land,” (Daniel 9:5-6).

God is good, but His patience is at an end.