What kind of business people are frequently late?

What kind of business people never let you know that they’re running late?

What kind of business people are absolutely unforgiving if you’re late?

What kind of business people never apologize for being late?

What kind of business people claim that they are “on time” if they are under 6 hours late?

Airlines, that’s who!  I’m not sure why we put up with it, but we do.  Honestly, their behavior is outrageous.

Today I am at Milan Malpensa Airport.  I was here on time for my flight, but the plane is 6 hours late.  No apology, no explanation, besides “technical problem” was given.  I was lucky enough to find one of the 3 plugs in this part of the airport.  Thus the ability to write a bit as I wait.

I have to say that I am glad not to be stuck on the plane for 6 hours.  A friend was on her plane for 5 ½ hours before the start of a transatlantic flight.  So add 7 or 8 hours to that 5 ½.  The airline can maintain a good “on time” record if they manage to take off within 6 hours of their scheduled time.  Being stuck in the airport is far better than being stuck on the plane for all that time.

Of course it’s always wise to travel with something to read, but 6 hours in an uncomfortable airline waiting room chair is still too much.  I feel especially sorry for one of my companions.  She’s a young mother with a 2 year old.  She told me that they had left the house at 5:00 this morning, and now our flight (originally scheduled for 12:50) is scheduled for 7:00 this evening.  Her little boy is cute, and a very happy child, but how do you keep a 2 year old entertained for 6 hours in an airport?  I don’t envy her at all!  Every once in a while I see him dash past me with her in pursuit.  She had asked the airline to put her on a flight to somewhere near Budapest, but they refused because it would mean putting her with another airline.

If you can see a pink Z next to this notice, you might know which airline I was flying!

I had missionaries who were coming to meet me at the airport in Budapest from about an hour away.  They were going to take me to a gypsy Bible study group, but I will have to miss that.  I checked into the possibility of being compensated in some way for missing the meeting.  But that’s not happening.  I guess I’m glad it’s not actually costing me money to miss the meeting.  But I imagine that some of these people might lose money over being late.

You can pass the time playing silly games with your friends.

Anyway, that’s enough griping for now.  No matter how incompetent or inconsiderate the airline is, God is always good.  Maybe I’ll go see if that young mother could use a hand keeping the boy entertained. 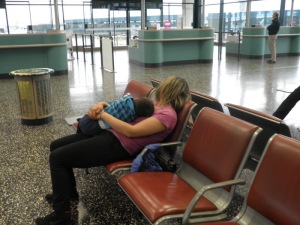 The young mother and her little boy take a rest.

I found the young mother with tears in her eyes.  She said that she had a terrible headache, so I offered to go get her some aspirin.  However, the airport newsstand that sells all sorts of other travel aids doesn’t sell aspirin.  They told me that I would have to exit security and go to the airport pharmacy.  By this point, it was too close to our 7PM takeoff time to do that, so I got her a bottle of water instead.

She refused the water, but told me that she managed to find someone with aspirin.  And she pointed to the signboard for our gate, which now had takeoff time at 7:50.  She was planning on taking a train to her town about 2 hours away.  She wouldn’t get home until about midnight now.  I wanted to talk with my missionary friends to see if there was any way that we could help her, but the really odd thing is that she vanished into the crowd.  I never saw her again.  I looked for her on the bus on the plane, at baggage claim, but she was just not there.  I have no idea what happened to her.

Some people might be discouraged by not having been able to help the young mother, and I felt that way at first.  But there are some people who are very closed and unwilling to accept help.  I suspect that is the case with her.  She told me that she is Hungarian, but her son and his father are Italian.  She said that she is a believer.

But although she may believe, she doesn’t appear to have a personal relationship with Jesus.  She didn’t refer to the boy’s father as her husband.  Also, I think she’s probably not Hungarian, but Romanian.  Many Romanians from Transylvania (Hungarian-speaking Romania) claim to be Hungarian because of the extreme prejudice of the Italians against Romanians.  Northern Romania is about 2 hours by train from Budapest.  I also got the sense that she was running away.  Perhaps the boy’s father is abusive.  Who knows.  One possible explanation for her disappearance could be the father discovering where she was and blocking her from taking his son out of Italy.  And being abused could be a reason for refusing help—abuse victims don’t feel worthy of help.  That tends to keep the cycle repeating on them.

Whatever the reason, she disappeared, and I never saw her again.  Nevertheless, I feel a peace about her.  I did what I could for her, but there is only so much that some people will accept before the burden of kindness becomes more than they can bear.  I think you call that a guilty conscience.  I prayed for her, and will continue to pray for her.  She didn’t allow me to do much of anything for her, but God can do what I can’t—and more.  God is good!