“Take a walk,” the Lord told me.  So I put on a light jacket and headed out.  It was a nice, sunny day, and much warmer than it has been in months.  When I got to the piazza near my house, I took out my camera and took some pictures of the flowering trees—straight overhead shots so that they were against that background of clear blue.  I took another picture of petal litter because the trees are raining petals.  Petals make a much prettier fall than leaves in autumn, and they smell a lot better, too.

Yesterday was a miserable day.  It is always difficult eating again after a 3 week fast.  Your stomach has to re-learn how to digest solids, and the size has shrunken.  I know this, and had eaten only a very small meal, but it was still too much.  I woke up with severe stomach cramps (not abdominal, these were localized to the organ, itself).  Then about 12 hours after eating it, the meal came back up, untouched by digestive acids.  The Lord told me to lay on my left side, and I was able to sleep.  But when I rolled onto my right side, my stomach immediately cramped again.  It felt like a rock a little bigger than my fist, just under my heart.  You can’t even imagine the pain.

Now, some people will read that and say, “Why fast, then?”  Fasting is an important spiritual practice.  I just haven’t gotten very good at getting back into eating again.  But there are things that you must fast and pray to get to a deeper level.  Am I going to quit fasting just because I go through some physical pain?  (Really excruciating pain!)  No!  Because it is more important to me to have that time of closeness with God.  Besides, He did help me through it.

About mid-afternoon I began to feel better, but still not 100%.  I went to bed about 7:30 and slept 8 hours straight through—something I haven’t done in decades.  This morning, although I woke early, I felt really good.  I had some business to take care of (printer problems and a dishwasher that sometimes wouldn’t drain), but those things that had seemed enormous when I was feeling so bad turned out to be very easily and cheaply fixed.  And that’s when the Lord told me to take a walk.

But flowering trees and petal litter, although nice, were not why He had me get out.  My spirit’s attention was called to 3 things:

You don’t see this so much in the US, but here in Italy there are people who set up tables outside the subway entrances or the grocery stores and sell belts, hats, sunglasses, umbrellas, cellphone covers, or purses.  Many of them have their spot and will return there daily to set up shop.  These people do not have a license and do not pay VAT (or in Italy the Partita IVA).  They are illegal.  The laws are not enforced rigorously enough to prevent them from their activities.

I knew this already.  But the Lord showed me that these vendors are modern day slaves.  They came here based on the promise of a better life, and many actually risked their lives to get here.  Now they work for a boss who supplies their goods and takes their profits.  They live in wretched conditions without legal documents, afraid of what will happen to them and to their families if they don’t sell enough.

The massage parlor is also a place of slavery, and there are massage parlors every few blocks throughout Milan.  At first I innocently believed that the Milanese were just a very stressed-out bunch of people.  But then I began to notice that the massage parlors had names like Desiderio (desire), and had pictures of beautiful women either draped as when receiving a massage or scantily clad and giving a massage.  One even had a picture of one of the rooms which had a double bed.  My older son is a massage therapist and he uses a massage table.  The massage table is high enough not to hurt the back of the massage therapist.  It is very firm, though padded, and is actually less wide than a single bed.  There is no legitimate reason for a double bed in a massage parlor.

Traditionally, the police have arrested or chased away both of these kinds of slaves, succeeding only in scattering them briefly.  The only country that has had any effect upon stopping prostitution is Sweden (see Nefarious Merchant of Souls for more information).  The US doesn’t see much of the street vendors because the laws are enforces, but that only drives the vendors indoors, where they set up sweatshops to do tailoring or manufacturing of cheap goods, or nail salons.  I would be very interested to see what we find if we investigated all the people who work in the nail salons.

There are 27 million slaves in the world today—more than in all history combined.  And this is despite the fact that slavery is illegal in virtually every country of the world.  We can’t afford to ignore this any longer.  Money paid to sweatshops or street vendors goes right back to the traffickers.  Hit them where it hurts: in the wallet.  Make a decision today. 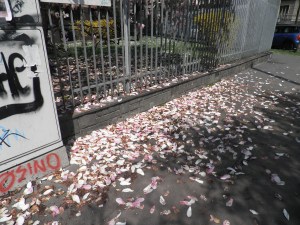 Oh, yes, and the cat?  Just like that lost kitty, there are families that have lost their loved ones into the black hole of slavery, never to hear of them again.  Take a walk.