Two of Mom’s three dogs are “rescues,” that is that she got them from the pound instead of from breeders.  Rescues tend to be mixed breeds, and if not adopted, they will be euthanized.  In many ways, I can relate to rescues because I feel more like a mutt than a pedigreed purebred.  And like the dogs, I was under the sentence of death, but Jesus rescued me.

All my life I’ve felt like a misfit.  I didn’t know precisely what to call that feeling until I moved to Italy.  As a foreigner in Italy, I finally understood this misfit feeling to be feeling foreign.  Yes, all my life I’ve felt foreign in my own country, and even among my own family.  Peter Wagner in his amazing book, Your Spiritual Gifts can Help Your Church Grow, points out that this is a sign of a missionary gift and calling.

I moved to Asheville over a year ago, but in truth I have spent very little time living here.  During this time I have visited a few churches to which I had been invited, but mostly attending Mom’s church and going to Bible studies and services here in the retirement community.

The first church that I was invited to (the day after moving day) was the church next door.  It is a small, very friendly church and the worship style is chandelier-swinging—which I love.  I like worship that is uninhibited and free because then I know that the people behind me (I prefer sitting down front) aren’t shocked by my uninhibited show of love for my Lord.  I have visited some churches where I have gotten comments about the freedom of my worship.  One pair of teenage girls once told me, “Wow!  You just don’t care!”  That could be taken a number of ways, but I prefer to take it as a compliment.

Most of the time I live in Italy.  And because of my traveling lifestyle, even when I’m in the US, I haven’t had a whole lot of opportunities to attend this church or get to know its people.  Until now, that is!  Before going to the conference in Dallas, I attended a Sunday evening service (before Thanksgiving) in which each of us was asked to share what we are thankful to God for.  In hearing about what they were thankful for, I learned that almost everybody there was a rescue like me—rescued first by others in the church, and then by Jesus.  Many of them are misfits like me.

The associate pastor told me that the church’s mission is to help those people who have been wounded by bad church experiences.  Certainly there are a lot of those, not just in Asheville, but all over the US.  It certainly is good to know that there is a place where misfits can fit together and all of us can be rescued—by each other and by the Lord.  I love my misfit church!  God is good! 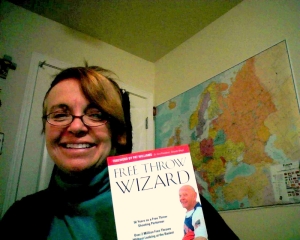 I had a dream last night:

I was kidnapped by an elderly couple.  They were so notorious about kidnapping people that they were nicknamed Bonnie and Clyde.  Then they kidnapped me, and I found out that they are really nice people.  I could see that they kidnapped people because they were lonely.  When I got the chance to escape, I did.  But the next time I saw them, I voluntarily got into their car.

Immediately, I recognized this as a dream about the retirement apartment where I live with Mom (my residence when I’m in the US).  It’s an independent living facility, which means that they provide no nursing care.  Basically, it’s an apartment complex with a communal dining room and lots of group activities.  Because we eat almost all of our meals together, we have developed a group of friends here.  Of course, there are some people that we are closer to than others, and there are some who we actively avoid (like the man who put a gift-wrapped tube of KY jelly into Mom’s purse on her birthday).

Loneliness is a universal plague, and even more so among the elderly.  Some of them have lost their spouse, some have lost their siblings, and some have even lost children.  And when all that loss is piled on top of the loss of normal faculties (hearing and vision), loss of health, and loss of independence, many become depressed.  Depression perpetuates and exacerbates loneliness so that it becomes an ever-more vicious cycle.

Today, I voluntarily let myself be “kidnapped”—twice!  The first was Benny, who always wears a Jesus cap, indoors and out.  He’s a sweet guy who loves the Lord and loved his wife.  They had been married for 52 years, when she had a catastrophic stroke and died a few years ago.  He’s never gotten over the loss.  When he talks about meeting Jesus face-to-face in a near-death experience, his eyes tear up.  And when he talks about his wife, the tears overflow.  But he’s always got a friendly word and a ready smile.

The second one was Fred, who always wears a basketball jacket and cap.  I had seen a painting up in the hall outside the Game Room, and noticed that his name was on it.  He had painted a church in Rome, so at lunch I complimented him on the painting because I knew it for a church in Rome even before reading the title.  He was very excited to have his painting noticed and recognized.  His wife died just before he moved in here as the very first tenant two years ago.  Then he told me something else about himself: he’s the Free Throw Wizard—he’s shot over 2 Million free throws without missing.  And here’s the really amazing thing about that: he shoots from behind a stack of boxes eleven feet high—he can’t see the basket.  In fact, he gave me his book titled Free Throw Wizard, and you can watch him on You Tube: Free Throw Wizard.

Here’s the thing: it only cost me a bit of time, but in both cases, I made these men happy just by being available to listen to them tell me their stories.  Sometimes you’ll meet a Free Throw Wizard, and other times, you’ll just help somebody find a reason to smile.  Either way, it’s all good.  And the bonus is that a good listener is never lonely.  God is good!  Now get out there and share His goodness with some lonely people.

Today’s page from my Devotional Journal

At the end of August I bought a diary, and started recording the daily personal words that God was giving me.  Since the dates in the diary start about a month before I began keeping my devotional journal, I began inserting dreams on those blank pages.  That’s why the date on the page pictured in my post of November 4 (see Swedish Fish and the Nice Young Man says (in Italian) August 23.  (Tomorrow I will write about some of those dreams—stay tuned!)

Here’s how my devotional journal works: after prayer time, I always ask the Lord if He has a word for me for today, and He gives it to me like this: I get the impression in my mind (sometimes hearing His voice) of a verse.  For example, today’s word, He said in my mind: “Jonah 4:2.”  So I looked it up, having no idea what it said.  All I knew is that by the fourth chapter of Jonah, Nineveh had repented and been spared, and that Jonah sat outside of town, angry that God had spared those rotten Ninevites.  So here’s what it says:

O Lord, is this not what I said when I was yet in my country?  This is why I made haste to flee to Tarshish; for I knew that You are a gracious God and merciful, slow to anger and abounding in steadfast love, and relenting from disaster.

Forgiving Nineveh is no small thing when you understand how offensive sin is to God.  People sometimes think that the God of the Old Testament had a terrible temper and that His anger was way over the top.  But the reality is that sin is so vile and offensive to our Holy God that His justice cannot allow it to go unpunished.  The God of the Old Testament is the same as the God of the New Testament.  The difference is that Jesus took the punishment for our sins, so now we can enjoy God’s mercy.  See how Jonah describes Him in this verse: gracious and merciful, slow to anger and abounding in steadfast love, and relenting from disaster.  That doesn’t sound like most people’s idea of the Old Testament God, but He is the same yesterday, today, and forever.

So, here’s what this verse means to me, personally: I have resolved the robbery issue as much as possible at this time, so this morning my mind went back to the thing with Barbara and Leo throwing me out of their house (see my recent post Kicked When I was Down).  Why go over the whole thing again?  Honestly, I would rather forget it and move on.  But here’s the thing, they involved a family member—one who has always been ready to think the worst of me.  I will have to go to family get-togethers with this person.  I’m not going to slink off like someone who was in the wrong, but family get-togethers with him could be very uncomfortable for me from now on.  Nor am I going to stop speaking to him, although I feel very threatened and defensive, and not at all ready to see him again.

I hate confrontation, but the passive-aggressive way that Barbara and Leo treated me was very hurtful.  And my family member’s willing involvement in that passive-aggression was very hurtful—even more so.  Nobody ever asked for or heard my side.  Then I found out that there was also gossip about me and this situation, and still my side has never been told.

So what to do?  I don’t want to ruin the next family gathering, but every meal at his house will leave me feeling scrutinized to see if I clear the table and wash the dishes.  Of course, I’ll have to—and promptly.  And if he tells me that I don’t have to wash dishes, then the whole thing could come exploding out of me.  I don’t want that, either, but my side has never been told.

Through this verse, I see the Jonah in me and my attitude.  I feel the Lord telling me that I must forgive.  Forgive them (which I have already done) and forgive him (which I’m trying to do).

What do I want?  I want to forgive, forget it, and move on.  I want my emotions to catch up with my intellectual decision to forgive.  I have learned that there are some people that I need to forgive every time they come to mind because the hurt goes so deep.  But I know that if I faithfully hold onto that decision to forgive, eventually, the hurt will be gone, and the offense forgotten.

Forgive like God, who truly forgets the offense.  God is good!