Last Year – When I was here at the beautiful Adriatic Sea last year, the Holy Spirit told me to go for a swim.  I loved the beach when I was a kid—what kid doesn’t?  But as an adult, I had come to associate the sea with many discomforts: the itchy feeling of salt water dried on the skin, oily sunscreen crusted with sand, fair skin that burns despite the use of sunscreen SPF 45, the sand that gets into places it shouldn’t, and a body that’s white and lumpy and looks better clothed than in a swimsuit—intense body shame.  So it was with all that beach-hating baggage that the Holy Spirit told me to take a swim.

Despite my bags and baggage, I did take a swim.  Leaving my glasses on top of my towel, I walked toward the water.  I saw something washed up on the beach that looked like a dead jellyfish.  I’ve been stung by jellyfish.  It’s like being stung by an electric wasp—definitely an experience I don’t want to ever have again.  But instead of turning back, I just laughed.  If God wants me to swim, then He has a purpose.  “Besides,” I told myself, “it was probably just a plastic bag from somebody’s beach lunch.”

I had decided that my act of obedience meant that I should get completely wet.  So I got about waist-deep, then dove into the waves.  After paddling around for a few minutes, I thought that I was finished.  But the Holy Spirit told me: “Lay back.”  I did, and discovered something wonderful: I float like a cork!  I am so buoyant that I can even float with my head above the water, toes above the water, and bottom down.  But laying back with my ears under the water was incredibly peaceful, and little by little I felt my limbs release their muscular tension.

I took that first swim fully clothed because I didn’t have my swimsuit with me.  I understood that swimming would be something I should do every day while I was here, so I knew I needed to buy a swimsuit.  The only thing I’ve hated more than the beach is buying a swimsuit.  The last one I bought online, and it covered so much of me that it was almost a throwback to the old swimsuits they used in the early 1900’s.  I knew that if I thought too much about it, I would talk myself out of buying one, so I just plunged into a swim shop and bought one.  It’s not bad looking.

A few days after that first swim the wind kicked up, bringing bigger waves.  Thanks to a breakwater, the big waves are tamed into choppy little wavelets before they reach the swimming area by the beach.  During my floating session that day, God (who had never repeated Himself to me before) told me: “Relax!  Relax!  Relax!”  And the little wavelets shook each limb with a different rhythm and out of synch with one another.  It reminded me of a Lamaze exercise in which your coach takes an arm and your teacher takes the opposite leg and they shake them in differing rhythms.  You are supposed to practice releasing the tension in those muscles and all the others in between.  And that memory tickled me so much that I laughed out loud—and a more profound relaxation followed.  God has the greatest sense of humor!

The lesson in physically relaxing taught me to relax when I’m worried about things going wrong.  Without going into detail (which you can read about in my book “Look, Listen, Love,” available from http://www.lulu.com/), I learned that I can relax and let God work out the things that I have no control over.  And when I do really relax and release those worries, God not only works things out, but blesses me in unexpected ways.  And one of those things, you can read about in my blog post: https://europeanfaithmissions.wordpress.com/2012/06/17/god-meets-radical-faith-with-radical-provision/.

This Year – I have returned to the beach, bringing two very dear friends with me.  The three of us have gone to the beach each day, floating and swimming, talking and laughing, praying and praising our Heavenly Father.

A lesson that God has been teaching me recently is to let go of the past—particularly past offenses and betrayals, but also past mistakes or bad choices that I need to forgive myself.  I have been working on it, releasing those people and things to God, forgiving and letting them go.  But every once in a while, the memory of these things comes to mind, robbing me of my focus and trying to rob my peace.  Whenever this happens, I try to release the memory as quickly as possible.

While floating yesterday, the Holy Spirit told me that, just as I had learned to relax my worries into God’s hands, I also need to relax my memories into His hands.  And lying there on the bosom of the sea, I did exactly that.

When it comes to relaxing my grip on those memories, would it be wrong to say that I’m working on it?  I’m grateful that God is a patient Teacher.  God is good!

The patriarch of my host family here in Hungary, Tibor, teaches earth sciences and is an avid naturalist.  There is a glass case in my room with a gem and mineral collection, including petrified wood, a shell collection, and a bug collection (I thankfully noted that they’re all dead).  Tibor had been teacher of the morning the day I arrived.  Unfortunately, I missed it because I arrived close to midnight.

Tibor likes to learn the English names for plants and animals.  The other day he approached me with a plant to smell—I knew it immediately: rosemary.  He brought me another one: basil.  But he stumped me on the third one, which I had never seen without flowers: oleander.  There are also several orchids around the house, and lots of flowers in the garden (where I discovered kittens first thing in the morning after I arrived).

There is a river that runs through their town, and just outside of town is the confluence of this river with another river.  He translated for me the names of the rivers: the Black and the White rivers.  He delighted to show me the rivers at their confluence and the river dam, where the fishing is good on the spillway and the dammed part is good for motor boating.  I saw several holes in the ground as we walked back to the car, and asked about them.  When I see holes in the ground, I think “snakes.”  But Tibor said that they are mole holes.  Given the large number of holes, I think moles are far more likely than snakes.

At the Summer Camp, where I’ve been helping out all week, there is another avid naturalist, Alexander.  Unlike Tibor, I think Alexander is strictly a hobbyist, but his passion for all things natural is obvious.  Since he doesn’t speak any English, Alexander had never approached me.  But since I have a curiosity about nature, I approached him.  Alexander brought an enormous telescope to church and had it set up in the yard during snack time.  It was equipped with a special filter for viewing the sun.  He showed me a book with a picture of sunspots and gestured at the telescope.  I looked through it and sure enough, there were several sunspots, just like in the book.

The next day Alexander brought a jar, and from it he produced a live bug about an inch and a half long.  He was letting the children touch and hold the bug (depending on their willingness).  I looked on, amazed as always at how children could touch something that I simply cannot bring myself to touch.  Seeing my curiosity, he approached me with the bug and held it out for me.  My body language made it obvious to him that I have a fear of bugs.  He tried to reassure me that it was harmless, and even if I had understood the words he used, it would have made no difference.  There’s something deep inside me, an ancient revulsion, that cannot be reasoned away.  I’ve faced all my other fears and conquered them all: flying, heights, public speaking.  But as much as I would like to conquer this last fear, there’s just something too ingrained to be overcome. 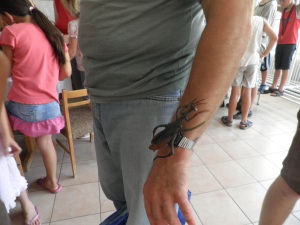 It’s not real, but real enough for me! EEEEEEEEK!

The following day Alexander came to me holding a bug that was four inches long—it was made of rubber.  He tried to get me to touch the rubber bug.  I couldn’t even touch it.  I understand that he was trying to help me overcome this unreasoning fear of bugs.  And I appreciate it, but I couldn’t bring myself to touch it.  He didn’t push it, but backed-off as soon as he saw that I couldn’t do it.  The bug had a suction cup on its belly, so he stuck it to his watch, and proceeded to show me other things he had brought: a plastic lizard, a wooden turtle, and several nature books.

The final day of Summer Camp, Alexander showed me several old calendars he had: calendars of Alaska, calendars of sea creatures, calendars of birds.  As he showed me page after page of wonders, he chattered as though I could understand.  What I did understand is both his passion for nature, and his kindness toward me and toward the children.

Last night Tibor had a surprise for me.  He took me to meet the town cheese-maker.  The cheeseman showed us how he makes the cheese.  He put a piece of aged cheese under my nose and was surprised to see how much I appreciated the smell.  I explained that I live in Italy, so I know that the stinkier the cheese is, the better it tastes.  He appreciated that.

Today there was a conference for the seniors of the church, at which Pastor H. Koraćs Gėza spoke.  I was told that I would have about five minutes to speak to them.  So of course I prayed about it, and here’s what I said:

Looking out here at all the gray hair, I am aware that many of you and your parents kept your faith in Christ under the oppressive rule of the atheistic Communists.  I have two things to say to you: First, I am deeply sorry that my country believed the lies of the Communists and did nothing to help you.  Secondly, I know that someday you will trade your silver crowns for gold crowns.  I am here to honor you for your faithful service to your Lord and mine.

To the young people here I say: learn from these elders, and share the love of Christ with everyone you know.

And finally, I would like to thank Pastor Gėza for coming.  It is an honor to meet you.

When Pastor Gėza returned to the platform, he observed that Christianity had actually flourished and grown under Communist oppression.  He said that Christianity now faces a far more dangerous enemy in the form of complacency.  I believe he’s right.

Tonight at dinner, Piroska, the matriarch of this family observed: today has been a day of spiritual cleaning.  Yes, indeed, it was!